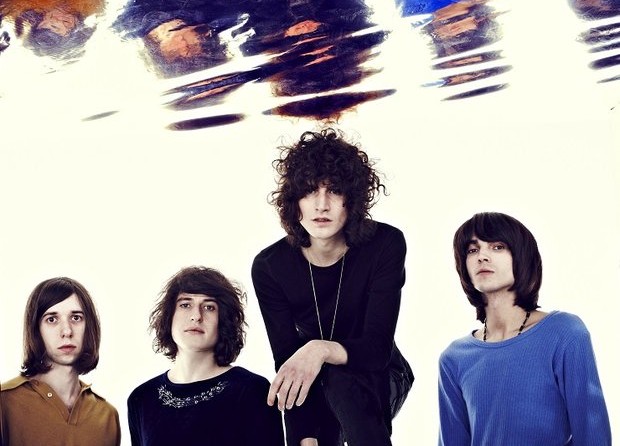 Northern Transmissions talks with Tom Warmsley from band Temples. The guys were on a bit of a break from touring, chilling in their hometown of Kettering.

NT: Do you find all the the comparisons to the Beatles a bit flattering, or do you find them to be a bit of a hindrance?

TW: I guess it could be a bold thing for someone to write. It can definitely feel like a compliment at times, and hard not to feel a bit flattered. But at times it can also seem a little predictable. Our songwriting can be similar, but it think we’re a bit more influenced by bands like The Byrds.

NT: What is it that gravitates the band towards Psychedelic music so much?

TW: There’s something about the genre, it involves so many styles and sounds. I find it also really comes out in the live experience. It is definitely really a sensory thing as well. We all enjoy being a part of it when we are playing before a crowd. It’s really important to the band that the audience really gets into the show as well.

NT: Did the band have to learn a bit more about technical side of things, in order to really capture the sound that you were looking for?

TW: We basically just recorded the songs in Jame’s house. He had been recording things for quite a while. It was really a question of just going with sounds that we liked. Adding a different drum or bass sound that we thought sounded interesting. We approached the recording with the attitude of not being afraid to try different things, like distortions as well. The whole thing was quite impulsive, we would write, then try to record immediately.

NT: Tell us a bit about Kettering, is there a bit of a psych scene there?

TW: No, there is nothing like that around here. The town is situated in the Midlands. I think there was a music scene at one point. It was probably the lac of a scene that actually got the band together. We met over our mutual love of vinyl. We traded records together, we were constantly trying to out do each other (lol).

NT: You have a show with The Rolling Stones at Hyde Park coming up. You must have been pretty excited when you got the call? Are you a little nervous?

TW: We were quite excited when we found out. I think it will be an incredible event. It really should be quite a bit of fun as well. It’s quite unbelievable to think that we will be sharing the stage with one of our favourite bands of all time. The Stones have really had staying power. I mean they’ve had their time in the 60s and 80s and are still going at it. There are many revival bands out there, but The Stones just really seem to be able to do it.

NT: You talked a bit about the psych sound being very sensory. The videos you guys have done are a bit on the trippy side. Can you talk a bit about the concepts of “Colours Of Life” and “ Shelter Song”?

TW: We did the video for “Shelter Song” on an iphone in one evening. It was really quite surprisingly simple. We basically referenced what we wanted to get across with basic technology. We really had no money. “Colours Of Life” was a very similar concept. We really tried not to take everything to seriously. Who knows, we might change and make a big video next time (lol).

NT: You guys signed with Heavenly Recordings, a pretty good fit for the band. It’s a pretty good story for those who haven’t heard it.

TW: We really only had a couple of demos recorded. One was “Shelter Song”. Jeff Barett from Heavenly managed to get a hold of a copy. We met him and he released it. We had an agreement based on a handshake. Heavenly is truly one of the most reputable labels in the UK. They are a label that are not afraid to take chances. They put out what they actually like. They also work independently, which really appeals to us. As well, when we signed, we barely played a handful of shows. The whole thing really happened pretty quickly.

NT: Which five albums have had a strong influence on ‘Temples’?