“Telephone” by Most People

For this project, directed by Seth Mendelson, Most People bring to you an audacious performance by two wrestlers from the Toronto League of Lady Wrestlers. Who is the LOLW? A group of wrestlers exploring issues of power and gender stereotypes through the spectacle of professional wrestling.

“The idea of doing a video in collaboration with this amazing posse is so exciting we just jump up and down every time we talk about it. We love what they stand for, and we love their gritty, raw, ridiculous ways and we love their style! For this video, two new characters developed by the LOLW will face off for the first time. And its gunna be INSANE!”

Most People was started by multi-instrumentalists Brandon Gibson DeGroote and Paul McEachern in 2010. The twosome began performing live as a group in 2011 and recorded their self-titled debut the same year. In 2013, Most People was invited to be one of the inaugural Artist Incubator acts for Wavelength Music, long-running champions for Toronto indie music that discovered the likes of Broken Social Scene and the Constantines in the early ‘00s. After receiving grants from FACTOR, the band started to perform larger shows such as the ALL CAPS! Island Festival and toured with fellow Wavelength Incubator bands Fresh Snow and Del Bel.

Violet Spaces is the second in a series of EPs the duo has released since their self-titled debut LP dropped.

The EP was produced by Toronto electronic musician DIGITS, who was the band’s first choice due to his minimal, clean style, and expertise in electronic production. As with previous Most People releases, it was recorded with Sydney Galbraith at Desert Fish Studios. 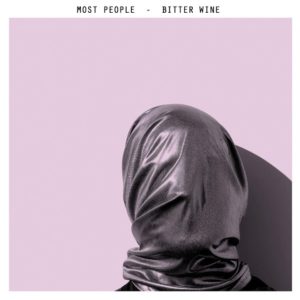 “Bitter Wine” by Most People