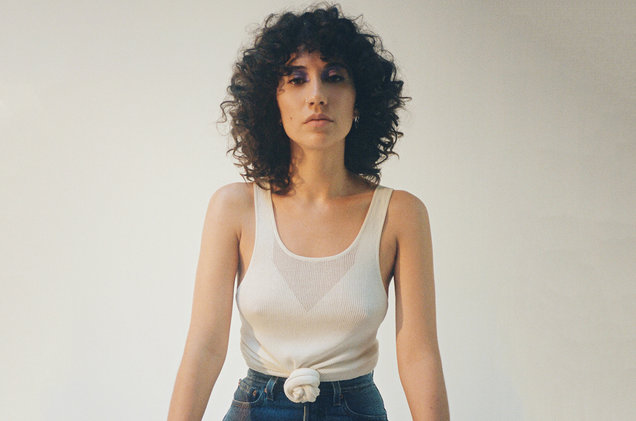 Valerie Teicher has been all over before her time under the moniker of Tei Shi. Leaving Argentina, and spending time across Canada and the U.S. for school she now calls New York home for her new found career as one of the most critically adored rising pop artists. Touring with MØ, and releasing one of the best debut records of the year so far, Teicher is set for a promising career. We caught up with Teicher to ask about her building following, multiple homes and how Montreal affected her latest record.

Northern Transmissions: How did you and MØ start touring together and what’s been the most fun part of the experience?

Valerie Teicher (Tei Shi): I was on the road opening for her for a couple weeks. We initially connected over social media so we were on each other’s radar. She reached out about supporting her on tour and I was really into the idea. It was really fun, her audience is really energetic and her show is really dynamic and fun so it was a really good environment to be in and her fans are really receptive. It was just a really good time, she’s one of the sweetest I’ve ever met so it was nice to chat with her and get to know her.

NT: What’s made you decide to stay in New York considering all the places you’ve lived over the years?

VT: I always kind of had an idea that I’d be in New York at this point in my life or when I had the chance. I think what appealed to me the most is that I’ve have moved around so much and lived in so many environments and cultures, I think New York is a place where all those things meet. You can find any identity or cultural or artistic world here. That always called to me I think, and I studied music in Boston so I was pretty close by three years, so the move seemed like a natural progression after I graduated. But also I think it took me a while to find my place in terms of how I wanted to find my place in terms of how I wanted to pursue making music and pursue being an artist. I think moving to New York was really the decision that I needed to make for myself to get in that headspace and be in an environment that’s kind of endless. It was more just making a choice that defined my own path and made it easier to do some of the things I wanted to do before and take some chances. That’s where I started pursuing this project and putting music out as Tei Shi, it’s pretty intertwined with this place.

NT: You blend Jazz, art pop, psychedelic rock and even hip hop styles on Crawl Space, are these all styles you like to work in or does their mood appear once you’ve started writing?

VT: It wasn’t so much a conscious decision that I want to cover these kinds of styles or genres but there are a few different factors. I wrote this album over the course of a year and a half to two years so I was in a lot of different places. It went over so much time and space that it bred that kind of diversity in the sound. It’s more my own preferences in music that I was a fan of as a music listener, I don’t consider myself in one genre as a listener or with the music I try and make. Because of that I’m drawing from a bunch of different styles and that is definitely something that I set out to do with the album, prove that I could do more than live in this indie-electronic space that I kind of lived in with the EPs, since I was pigeon-holed into those genres a little bit. That was more just a result of not having access to a studio when I was making the EPs. I had pretty limited resources so I was just making music with my laptop and I went a lot more about recording and the sounds that I wanted were more ambitious for the album. I wanted to focus on the voice more in these different kinds of context. It definitely was a deliberate goal to make really diverse and genre-defying music was my hope with the album.

NT: Looking at the vocals on a track like “Justify”, what inspired to push them into such weird but energizing ends?

VT: With that it’s more letting go of whatever notion of how I should sing or what a song should sound like. When I let my voice do whatever it wants to do, it goes into these weird places. For me the voice is such a limitless instrument and a lot of people view the voice as not an instrument, it’s something I struggled with a little bit because I’m not proficient enough in any instrument to really write heavily with it. When I really started writing it was just with my voice and that’s how I arranged myself. I rely on my voice more than other artists so I’d learned so much to do with it. I think part of experimenting with it like on a track like “Justify” is aggression and frustration, trying to defy expectations for vocals on a pop song, breaking down labels and classifications. The screams at the end and the weird parts are an extension of that.

NT: Since your album’s title is about facing fear’s, what personal fears were you trying to overcome when writing this album?

VT: When you go to make something there’s always an element of fear and self-doubt. I guess making an album was something I’d built up in my mind so much that when I started putting music out in these shorter forms it seemed a full-length was something to be done very carefully. There’s a lot of insecurities and questioning yourself through that process, but also because I made the album for so long and went through a lot of ups and downs, coming out of this phase of starting to experience a lot of things for the first time like releasing an EP, starting to tour and all that. I was in a weird place making the album and making it there were a lot of hard decisions and changes I felt I had to make in my life to get to a better place. The album tracks a lot of those emotions, but it also was my way of coping with those things so by the time I was finished with the album I was in a way better headspace than before. It was my way of dealing with a lot of those fears and insecurities that were holding me back and also tracked those emotions in the music. That’s what resonated about the crawl space for me was the idea that when I was little I used to have a really hard time at night and I was really afraid of the dark and it was this ultimate thing to go in this dark crawl space. My logic was that if I sat in there for a minute and was fine, then there was nothing to be afraid of. I went back to that feeling a lot for this album, that I was working myself to do this thing that I was afraid or hesitant of doing at the time, but it was also my way of working through those issues.

NT: Was the tarantula album artwork feeding into this fear theme and how did you manage to keep your cool?

VT: The significance of that only really came to me after shooting and reflecting on it, and the album title was all this stuff that I’m talking about, it was all connecting the dots after I made finished the album. For the cover, the idea came out of the title, a very physical and visceral word, like crawl. I started thinking about how you could evoke that feeling of crawling visually, the idea of the tarantula came. I also like the idea of doing things that are challenging to me, or something I can walk away from feeling badass. So there was a drive to do this because I was really freaked out and grossed by it but after I realized there was also a layer that I was confronting a fear as well.

NT: Why did you decide to include the childhood recordings on the record and what kept you holding onto them for so long?

VT: They had gotten lost for so many years but I had had a lot of those. I’d had this phase in my childhood where I would record myself talking or singing, and they were lost. Five years ago I came across one in my sister’s room, and all of it came flooding back. I kept it in the back of my head, started making music and then the EP. I thought when I was making an album I wanted to use those. So when I was finishing up the album I went back home and was digging through boxes and found two more tapes. It was a process of finding small clips that were the funniest or the most striking for the album. Those are also the ones that stood out the most because there’s an element of self-deprecation and I still feel all those things. I’m my own worst critic and I struggle with the self-confidence you need to have as a performer. It was a coming full circle thing so it was funny to mix those with the music.

NT: Since you’re based out of New York City what brought you to Montreal and L.A. for the album?

VT: Montreal has always been a city that I feel a lot of connection with. I went to McGill for the first year of university. So I lived there for a year and that was where I started having these feelings that I wanted to change my path and pursue music. I left for Boston to study music but I still visited Montreal all the time while I was in Boston, because at the time I was dating someone who lived there. When I wanted to start writing the album I realized I couldn’t get anything done in New York anymore because it’s so hard to shut out the noise and find space. I just wanted to reconnect with Montreal in a different way so I rented an Airbnb and worked out of there for two months. L.A, was similar but itwas the second phase of the album so I’d booked another space where I could isolate myself and then New York was where the final parts of the album were done.

NT: What’s coming up for you in the next few months?

VT: I’m doing a short West Coast tour in mid-June. Definitely some more music video and visual stuff coming up. I’ll be doing a few one-off shows and festivals over the summer. By the fall I’ll be touring again in Canada and the U.S., hopefully the U.K. as well.