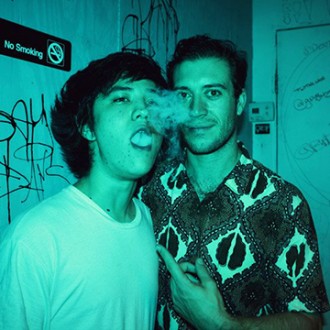 “Nun” is a collection of footage gathered from several surveillance monitors set to Earth. Director Hans Lo pieced together these image-captures of Earth’s ecosystems, ranging from the macro to microscopic.  Gathered from an unstable & unknown source, video that seems to have once been High-Definition is fully degraded, lossy to the brink of digital noise.

“I wanted to create a mood piece which hopefully carries/reflects the same intrigue and intricate nature of their music. It was a fun process burrowing through the voids of stock footage abyss and sharing similar reference points with the guys.” Hans Lo adds about the collaboration with Teengirl Fantasy.

Following up their sophomore LP Tracer from August 2012, Teengirl Fantasy will release a new EP in November as a teaser to their 3rd album set to drop in the Spring. The EP, titled Nun, does not feature any vocalists as some of their past works have. Consisting of four tracks, Nun showcases their ability to mix different genres while staying true to their original free-form sound. “Eric” touches on genres such as drum’n’bass, jungle, and footwork, while title track “Nun” is a sprawling, yet percussion heavy club journey, building in verve throughout. “Platinum” simulates a soaring feeling with airy synths that are offset by sparse hard-edged percussion. The EP closes with “Nun Beat,” a variation of “Nun” played at a different tempo to create a screwed R&B beat. Overall, Nun is reminiscent of Teengirl Fantasy’s earlier works while stepping into new territory and giving insight into where their sound is heading for their forthcoming third full-length.

While students at Oberlin College, Nick Weiss and Logan Takahashi connected over a shared love of classic house and techno records that prompted them to make, “some kind of dance music that wasn’t just emulating what we were hearing.” The duo formed their music organically, improvising over loops that eventually materialized into full-fledged compositions. Rather than relying on triggering loops, or quantization, Teengirl Fantasy’s music has always been performed and composed live, resulting in a form of discourse between the band and their instruments. The result is a-typical for electronic dance music- colorful, maximalist textures and tones that move along with a driving rhythm yet still retain a distinctly human and emotional core.

Released on This Is Music in Europe on November 25 and US November 26.