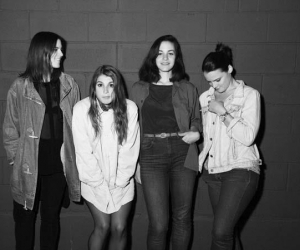 EEN share the video for “Circus” off their forthcoming EP, Carolina. The video was directed and edited by Elizabeth Skadden and filmed at Union Pool in Williamsburg, Brooklyn. Elizabeth Skadden has worked extensively with bands, including the Flaming Lips, No Age, and Chicks on Speed. Her work has been shown at many different types of venues such as the Marrakesh Biennial, Sundance Film Festival, and MTV. She was a member of the all-girl punk band Finally Punk.

Refining the psych-pop nuggets of In Limbo, TEEN’s new Carolina EP is a stepping stone in the way that all good extended plays are.  The band—lead singer and multi-instrumentalist Teeny Lieberson, keyboardist Lizzie Lieberson, drummer Katherine Lieberson (the three are sisters), and bassist Jane Herships—recorded the five-song record with producer Daniel Schlett, who recently worked on DIIV’s Oshin, at Strange Weather studio in Brooklyn.