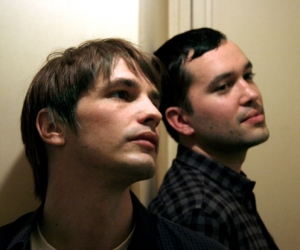 Team Ghost had put together a heady, ambient leaning mix to celebrate their stateside release called Temazepam, available on Mixcloud. The mix itself features tracks from Clams Casino, Julianna Barwick, Boards of Canada, Terry Riley, Brian Eno, Fennesz, and others, perhaps illuminating the headspace the band was in when writing and recording Rituals.

“The goal was to mix the raw live energy of a band with the precision of a synthesized landscape,” adds Benoit. “So we worked a lot, Nicolas and me, in my own studio, to record many different sounds, synths, textures. Once it was done, we went into the studio, recording the full band on tape, listening to the parts we recorded before in our headphones. But it was really simple, and it surprised us. It could have been a nightmare,” Fromageau says.

There’s been a deluge of stunning electronic music emanating from Europe for years, but it’s been a while since we’ve also heard swirling, noisy guitars echoing from the continent. Combining these two strands, however – the atmospheric synth textures of Tangerine Dream and Brian Eno, and the caustic indie-rock of Sonic Youth and My Bloody Valentine – is exactly what Nicolas Fromageau set out to do when he founded Team Ghost in 2009. Quitting his enviable role as one half of M83 in 2004, the singer, guitarist and producer left the sunny French Riviera town of Antibes for gloomy Paris, and indulged his love of darker, more gothic textures.

“When I left M83, I had no idea what I wanted exactly,” explains Nicolas, “but I knew I wanted to be a professional musician. So I took time to experiment, to find what kind of music I wanted to make. I guess Team Ghost is way darker than M83, as I love cold wave bands like Joy Division, Cocteau Twins etc… I just tried to create a new sound, I didn’t wanna do another M83.”

The core line-up of the band came together around two years ago, with the addition of Christophe Guerin on guitar and vocals, Felix Delacroix on drums, and Pierre Blanc on bass, alongside art director and ‘phantom’ member Jean-Philippe Talaga. The group swiftly picked up attention in France and abroad, supporting Crystal Castles on their European tour at the duo’s personal invitation, and receiving accolades from Pitchfork along the way.

After their two gauzy, otherworldly EPs, I Never Did Anything Wrong To You and Celebrate What You Can’t See, recorded at home and released on London’s legendary Sonic Cathedral label, Team Ghost’s debut album is the first time the band, now completed by French producer Benoit de Villeneuve on guitars, vocals and keyboards, have recorded in a professional studio. As such, their ‘coldgaze’ has become more streamlined – a popper punch in the gut compared to the EPs’ hazier sense of mood.