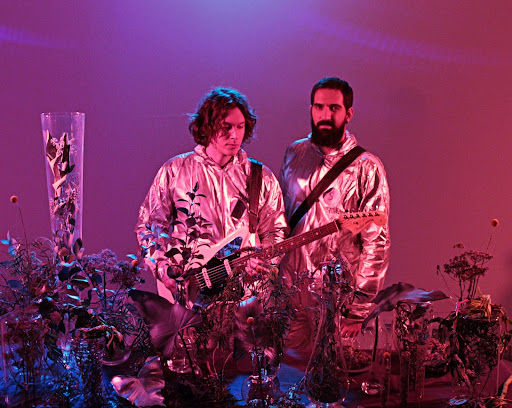 Atalhos, recently released their new single: “Te Encontrei em SP”.Featuring soothing vocal contributions from Delfina Campos, the Argentinian star joins the Brazilian duo for a track of languid and lush guitar-pop that drifts somewhere between the realms of Real Estate and Wild Nothing. A tranquil and touching tribute to their hometown, “Te Encontrei em SP” translates as “I Found You In SP”.

The single arrives with a radical reworking by Hidrogenesse. Coupling scattered synthesised beats and frenetic 80s stylistics, the Barcelona based production pairing (also known for their popping remixes of the likes of Hot Chip, David Holmes and Jarvis Cocker) transform this Atalhos original into an off-kilter club banger.

Speaking about how the remix came about, Gabriel Soares of Atalhos says:

“We met the Hidrogenesse duo in the KEXP event that we played (El Sonido 10th anniversary special), their performance was just before ours and I liked it very much. They seemed very funny to me and I’m so happy that they accepted our invitation to do the remix of our song Te Encontrei em SP. They made a very cool remix that somehow reminds me the synths of Virus, this 80’s Argentinian band which I am fan.”

While Carlos Ballesteros and Genis Segarra of Hidrogenesse add:

“We worked on the remix imagining that the meeting between the two characters of the song happens in a club. We had fun creating an ever-changing, edgy rhythmic base and punctuating the song with orchestral hits. We sampled the original sax of the song to use it as they did in the 90s in dance music, looking for that feeling of rave euphoria.”

Arriving like Brazil’s answer to The War On Drugs, Atalhos combine the reverb-rinsed touches of 80s’ Springsteen, the gentle grandiosity of Arcade Fire and the day-dreaminess guitar pop of Real Estate or Beach Fossils to create music as touching as it is timeless. And in 2022, the rising São Paulo band will release their new album: ‘A Tentação do Fracasso’. Translating as “The Temptation of Failure”, its title makes direct reference to the diary kept by the Peruvian author Julio Ramón Ribeyro. A direct influence on the name of the title track and the wider album too, Atalhos have designed a record to feel like the journey of a lifetime with all of the intimacy, atmosphere and connection. Combining layers of guitar picks, synths, and drum loops with reflexive and sentimental lyrics, it’s an album both profoundly transportive and wholly immersive. Ebbing-and-flowing with an ephemeral fluidity and a subtle grandeur, its 8 songs create dreamlike landscapes like portals to other dimensions.

Produced by Ives Sepulveda of The Holydrug Couple with Atalhos’ own Gabriel Soares, the album was recorded between Buenos Aires’ infamous Studio Panda, plus studios in Santiago, and the band’s base in São Paulo.