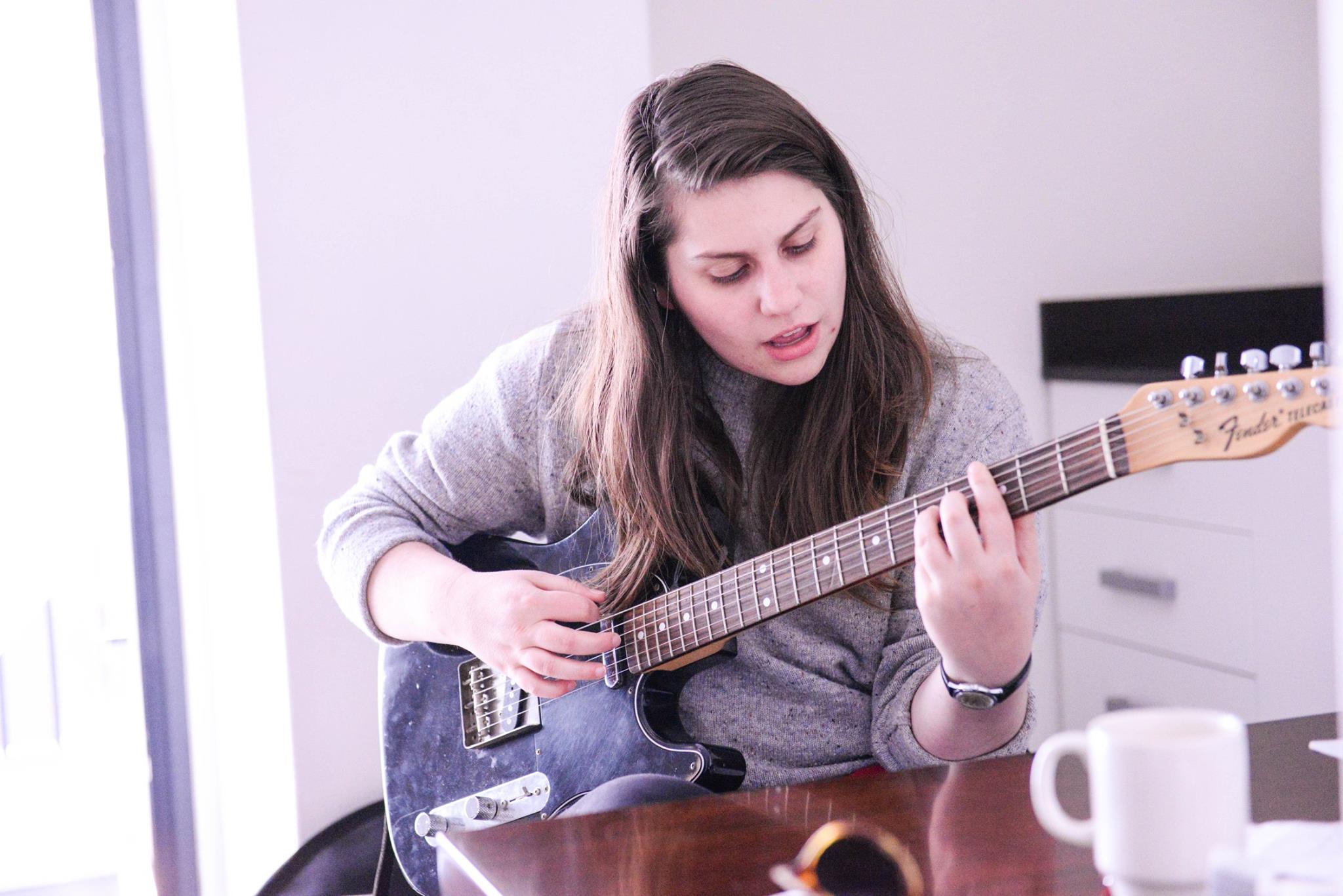 Melbourne’s Alex Lahey sat down with us at SXSW 2017 in Austin, Texas to talk about her music, her university experience, and Wes Anderson, among other things. Lahey’s most recent project is her first full EP titled B-Grade University. On the album, Lahey details her university career and how it went askew, as well as the issues pressing on a 20-year old at such a pivotal time in life. Lahey’s brand of catchy indie-rock with some fuzz is interesting, and that’s why she’s so buzzed about right now, as she’s one of music’s hottest up-and-comers.

How has your time been so far in Austin?

It’s been awesome. This is day 3, so the first day we got here we kind of got familiar with the area, went down to 6th street and sort of saw what it’s all about. It was still warming up, it wasn’t really happening yet. Got acquainted with Whole Foods and bought a whole lot of shit.

It’s good. It’s definitely good for saving money with breakfast and stuff because you can buy heaps of cereal and stuff. And it’s all good quality too.

I’ve been eating tons of pizza so far since I got here, yeah it’s not great.

Yeah that’s no good. But yeah yesterday we had most of the day off so I had to do some press and then we got all our gear ready, had to do some trips to guitar stores, drum stores. Then played a show at this student-commune thing, it was like a co-op. It was a bizarre space but really cool.

That’s an interesting way to dive into Austin.

Yeah, it was good.

I know you’re kind of just starting your US tour, how has that been? Is this your first time here?

It’s not my first time in the US but it’s my first time touring here, yeah it’s been awesome so far. The L.A. show we played was amazing. I had the best time, San Fran was awesome as well. After this we go up to Chicago and then over to the East Coast. There’s a blizzard there or something?

Yeah it’s been snowy up there, it’s grounding a bunch of planes. You also just announced the Football club is joining you on tour, what can you tell us about that band?

The Football Club are a band from the Western suburbs of Melbourne, and I first met Ruby who is the front person for The Football Club just at a gig we did in an Art gallery for a friend of ours and I just remember really liking her songs. Really honest songs about living in this particular part of Melbourne and relationships and the experience of being trans, all that sorta stuff. And the Football Club is her band and they are just awesome and really good people and have really good values.

It’s nice to see those kind of friendships formed organically instead of it being set up.

Yeah for sure, with all my support acts, like even here where I don’t know anyone, my agent sends through a bunch of different bands and then I go through all of them and I’ll be like, “Yeah I actually like this music the most” or feel a connection to them. But with The Football Club is was like, “I’d love to have this band tour with me.”

Yeah I went to uni after really enjoying high school and then I remember getting to uni and not enjoying it, which is strange.

Yeah, same for me.

Especially for someone who loved high school and loves learning and that kinda stuff. It was just a matter of choosing the wrong course. I ironically enrolled in music courses and winded up with an arts degree.It wasn’t anything to do with the quality of the uni or anything, it just wasn’t a good fit, and I think it’s important that people feel like they are allowed to chop and change and that sorta stuff. It’s not a one size fits all model and you can tailor it, I just think it’s nice to allow yourself that time to figure out what you want to get out of it but I probably didn’t do it as much, and I think there is sort of a pressure to stick with what you’re enrolled in in the first place.

I can’t tell you how much I relate to all that, I had a very similar experience. So what do you think of this millennial brand, we get billed as being lazy but you are very DIY – you sold your car to put out your first EP.

Yeah it’s really interesting because I’ve been asked that question a couple times since I’ve been here. The word ‘millennial’ is very American and we don’t use it at home, for us it’s like “Gen-Y”. So I don’t really get inundated with that kind of media saying that millennials are lazy and that they are going to fuck the world and we need everything immediately and that kind of stuff.

From what I’ve experienced of young people I think that there’s a real passion and drive for creating change and for making the world a better place and for addressing issues that maybe previous generations haven’t or aren’t – things like climate change or gender inequality or stuff like that, which I think fills me with hope. But at the same time, I think that there needs to be leaders in order to do that, and I think you can be a leader in any field that your in at any level that you’re in it, whether you’re a musician and you’re putting on a gig and you put in things to make people feel like it’s a safe space or something like that. Calling out online bullying. If you’re into social action, writing to your member of congress. I think there is a lot of capacity for those sort of things and I do think millennials are largely taking action. Would you agree?

I do agree. I think a lot of the reason why we are billed as ‘lazy’ is because we aren’t doing things in traditional ways.

I guess I need to go to Australia to escape the millennial brand.

Yeah it’s very much a thing here. It’s really ironic isn’t it because we talk about needing a break from the corporate sort of thing but the term millennial is some sort of advertising jargon to identify this group of people, this group of consumers and it’s kind of weird that now we’re using it as a social thing that’s breaking away from that world when it’s actually straight from it.

I totally agree. You have your “Wes Anderson” video, what is your relation to Wes Anderson?

I don’t have much of a relationship with Wes Anderson, I like his movies, they are good, they’re not like unbelievable to me. I enjoy them.

Oh, that’s not what I was expecting. I noticed the video uses the same kind of symmetry he uses.

It’s pretty funny. My mate who made the film was like, “We’ll make it look like Wes Anderson,” and then was like, “Oh my god, this is so hard.” But he did a really great job, and – he’s a filmmaker by trade – he got the subtle intricacies of how it’s filmed which I think is the real crux of the Wes Anderson aesthetic. Not really what’s in the frame but how it’s framed.

I wrote the song after I went on a date to go see Grand Budapest Hotel by Wes Anderson and that’s pretty much the relationship with Wes Anderson as it’s in the song.

You thought the movie was alright?

I thought the movie was OK, it’s not my favourite Wes Anderson movie but it’s better than some other one’s I’ve seen. I was just like, “Fuck, Wes Anderson would be a cool title for a song” because immediately as you think of the name you think of the aesthetic and the symmetry and the colours. Yeah, the title definitely came first and it was written about this relationship that I was in, and in that relationship we saw a Wes Anderson film.

You have a trend with all your music videos, they are pretty funny and well thought out. What was your inspiration for the “You Don’t Think You Like People Like Me” music video?

We had this whole film clip sorted out for this other song I was going to release as a single, then I wrote “People Like Me” and recorded it and my team and I were like, “This should probably be the single” and went with it. And because of that, we had to make a film clip with a really fast turnaround – which is actually the story for every film clip I’ve done.

With wall ball we wanted to have a sort of sports thing going on, but we wanted a sport with an aesthetic. One of the things that came to mind was that Courtney Barnett avant-garde clip where she’s playing tennis and they really capture the aesthetic of that really well. So we knew we couldn’t do tennis. Then I was thinking that I have some friends who play this wall ball game, and when they do it they dress up in this full on 80s gear with sweatbands. I think it was really good and really funny. To me it seems like they are really hamming up how seriously they are taking it.

Yeah, the girls on the other team in the video are my friends, and it was really easy to film because you just need a wall. And we filmed it in my manager’s office car park, so that’s kind of the story behind that. It was the first film clip I’ve ever been involved with making, so I felt like I was feeling my way through shoot. 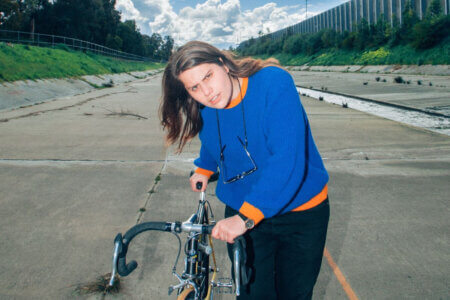