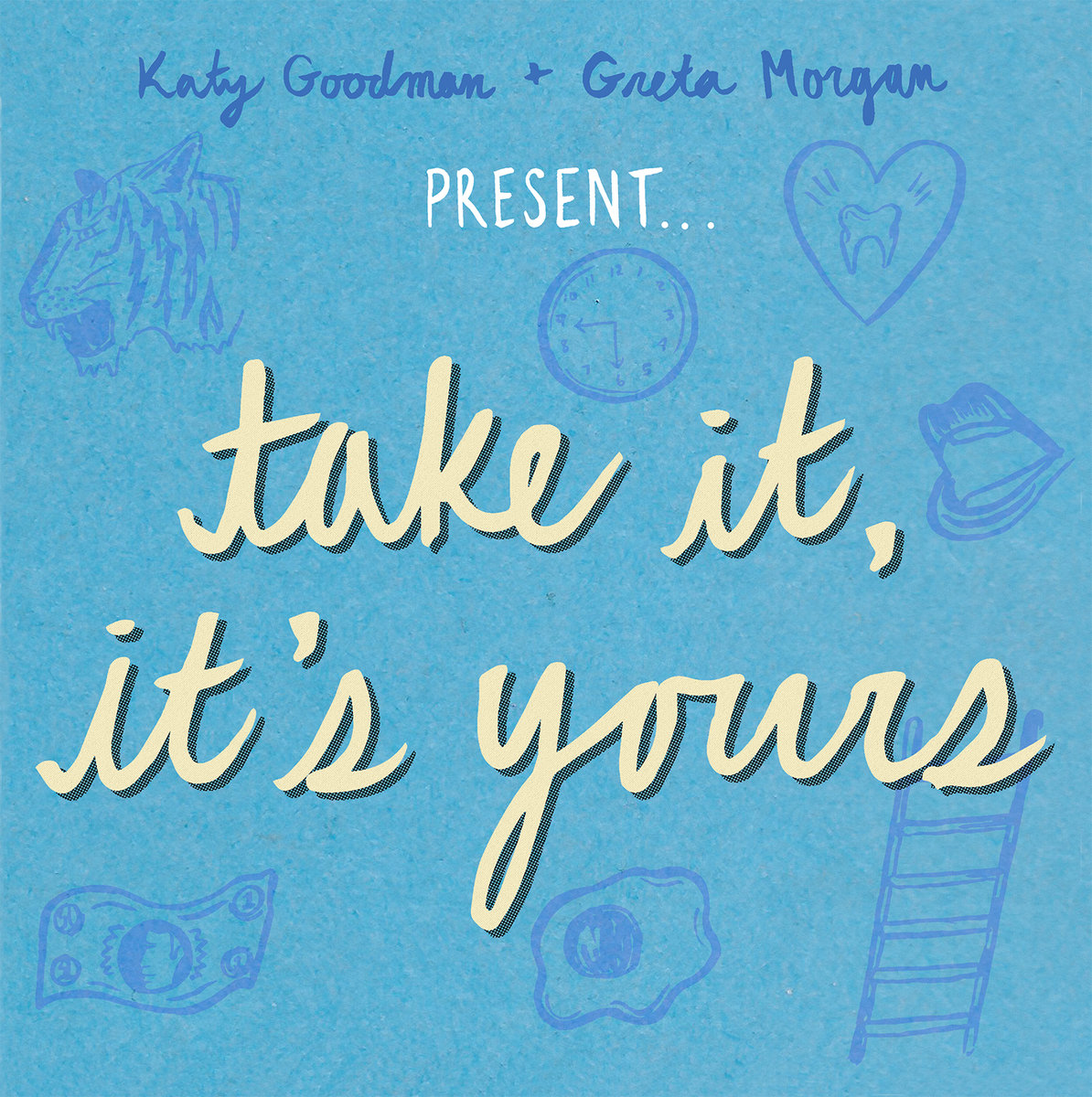 Take It, It's Yours

Punk will always have its detractors, those that will shoot it down for being nothing more than noise. But over 40 years after the genre first took shape, the music world’s been left with a number of surprisingly gorgeous, but gob-covered classics.

Some may scoff at the in-the-red genius of songwriters like the Misfits’ Glenn Danzig, the Wipers’ Greg Sage, or late Gun Club guru Jeffrey Lee Pierce, but not Katy Goodman and Greta Morgan. The pair of veteran performers have taken a bit of time away from their full-time projects (La Sera and Springtime Carnivore, respectively) to shine light on some of their favourite punk and new wave songs, they all being collected under the wink-wink title of Take It, It’s Yours. These aren’t traditional, spit-and-snarl sends-ups, though. Playing to strengths of their sublime singing voices and vintage pop-rock aesthetics, these are some hardcore cuts given a subversive dose of softness.

While Wipers’ “Over the Edge” was full of distorted guitar clatter and singer Greg Sage’s frazzled analysis of society, Goodman and Morgan opt to cushion the nihilistic blow with ethereal tendrils of reverb and an angelic duet. Slowed down and strummed, the cover’s opening chords sound quite a bit like

The Replacements’ “Bastards of Young” is an anthem, no matter how you play it. For this collection, Goodman and Morgan give it an outright golden alt-country makeover, enveloping Paul Westerberg’s lyrics on the generational divide with brushed drums, marimba and Twin Reverb guitar leads. The twosome doubled-down on their tribute to the ‘Mats by somewhat recreating the older outfit’s slight, simply-delivered music video of a booming stereo speaker.

The best cut on the covers collection is a take on the Gun Club’s “Sex Beat.” As could be expected, the junk-juiced yelp of Jeffrey Lee Pierce has been toned down, but Goodman’s coo still conveys the power of all of the song’s various twisters and turners. An almost meta analysis of life itself, it’s understood that the sex beat moves at various speeds.

While the intimate Americana approach does wonders for dejected Buzzcocks anthem “Ever Fallen in Love,” the trick doesn’t work as well for a cover of the Stooges “I Wanna Be Your Dog.” The vocals are pitch-perfect, and the guitars are crystalline, but its absence of drums and re-arranged, pop-positive melody takes it too far away from the the Neanderthal groove and devotional desperation of the Iggy Pop-sung original.

More devastating is a piano-modelled redo of Billy Idol’s “Rebel Yell.” Though that track was a Top 40 hit, Idol fits the bill, here, since he sang in first wave punk crew Generation X. The ‘tude of his perma-curled lip doesn’t hurt either.

Here, Goodman and Morgan offer a sparse reaction to the original’s steady drum machine clips and tic-tac-toeing synth patterns. While it had been fraught with twitchy, coke decade tension, the modern day vision is ultra lonely. Its open piano chords dissipate into midnight hour, the rebel yell rarely rising above a whisper. It’s a near-perfect reinterpretation, one where less is certainly more, more, more.