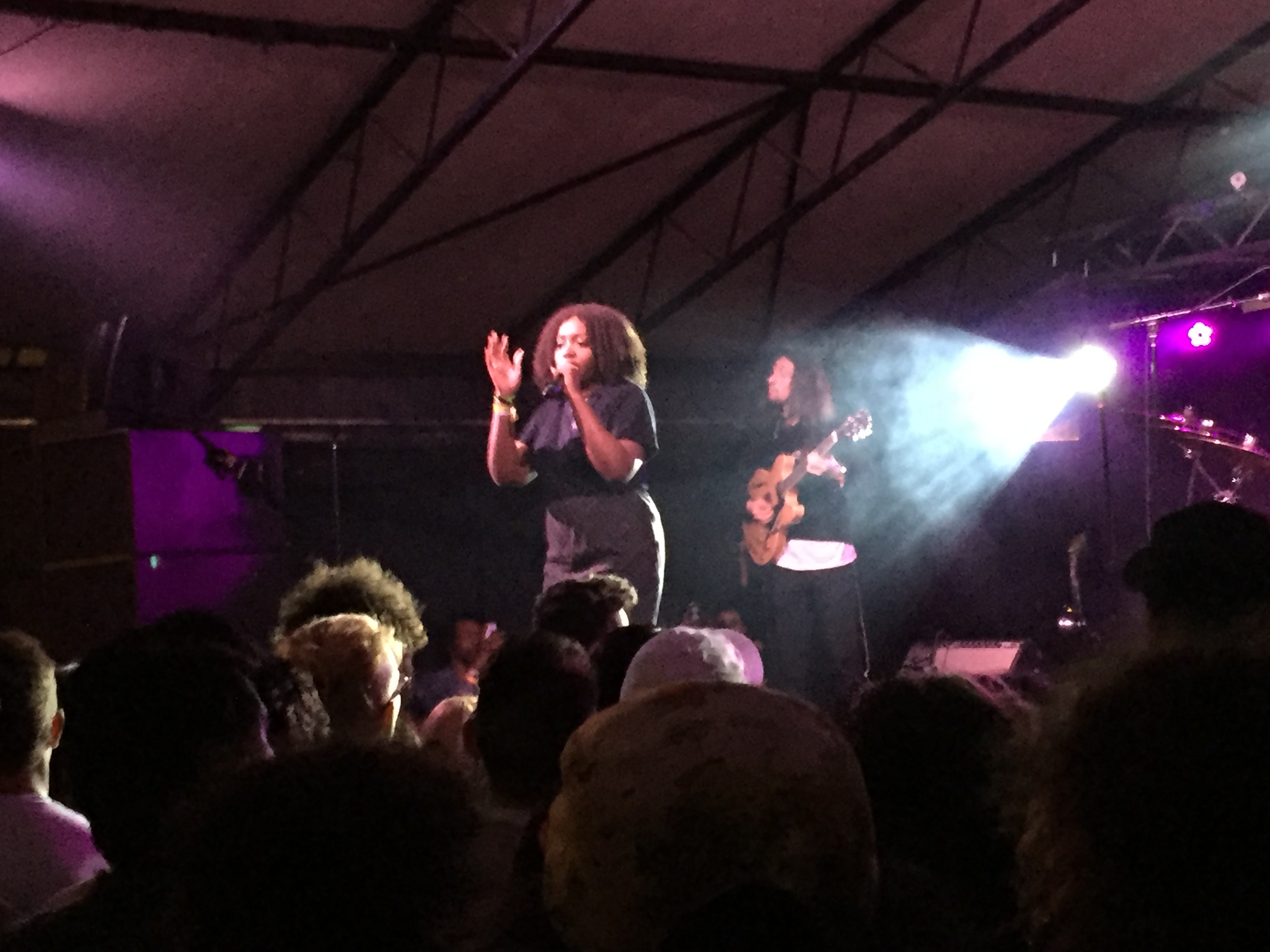 To start the day off, we headed to the House of Vans at a The Mohawk to see the Drums play. Johnny Price, the lead vocalist, came onto the stage in full gear, dancing to the music, immediately kick starting the crowd. The first song they played was “Best Friend,” off of their eponymous 2010 album, they then went immediately into “Book of Stories” off the same album. It quickly became apparent that The Drums were playing a greatest hits show, with selections spanning from their whole career. They later played music from Portamento, Encyclopedia, and even some new stuff. Price stole the show with his theatrics and solid performer-audience relationship.

We stuck around the House of Vans to see Hippo Campus, who opened with one of their newer songs, “The Way it Goes,” off of Landmark which was released earlier this year in February. Lead vocalist and guitarist, Jake Luppen, put his voice on display, showing how he can hit the high notes but still keep their raw garage-rock feel. Their backing vocalists’ harmonizing really added to the show, and gave the music a more full-bodied sound. The crowd was bumping as they played “Tuesday” and then “Western Kids,” which included a long jam and a couple guitar solos, Luppen stomping his foot on the ground and shredding. They closed their rocking set up by playing “The Way it Goes” again, and no one was upset about it.

We stayed one more show at The Mohawk for Betty Who from Australia. This was one of the most interesting sets we’ve seen so far at SXSW, as all the instruments were removed from the stage to make room for Betty Who and her two backup dancers. Betty opened with “Heartbreak Dream” off her 2015 album, Take Me When You Go. Betty was very friendly with the crowd, constantly talking with them, especially with those in the first row. At one point, she took an audience members phone for a lengthy amount of time and filmed herself singing from the stage. Betty’s sound is comparable to Grimes, that being said, it’s always surprising to see these kinds of artists on the indie circuit, who put on these arena shows (i.e. lead singer and back up dancers) in tiny venues. Betty put on a very upbeat performance, and the crowd enjoyed it.

After House of Vans, we headed over to Cheer up Charlie’s, where Polyvinyl was hosting a couple bands playing sets on their indoor and outdoor stages. The first act was Tim Kinsella and his band, who created a blasting wall of sound with their heavy, emo rock. They opened with a slow, long scratchy intro of fuzz, which wasn’t too pleasant on the ears if you didn’t have earplugs. What was interesting about this set was that it eventually morphed into a bluesy jam, and then a sweet, sincere country show. We then headed inside for Del Paxton, an emo-punk ban from Buffalo, New York. Their set was solid, and their lead singer and guitarist, Dylan England, accompanied their show with witty humor. Their set included fan favorite, “Koolwink” off of their newest project, All Day, Every Day, All Night., as well as some new, unreleased stuff. We are looking forward to an official release.

Heading back outside, we saw Tancred, who opened with their hard but bouncy track, “Joey,” off their 2016 album, Out Of the Garden. It was a great, melodic opener. The band as a whole sounded like similar to Weezer, but with a little more garage rock in the mix. It was unfortunate we had to keep moving on to see other bands, Tancred sounded great and surely they rest of their set went really well. We headed back inside to catch the beginning of Heat’s set. Heat is one of the Canadian bands down in Austin; they are from Montreal. Their set consisted of nice guitar melodies, reminiscent of The Strokes. Lead singer, Susil Sharma, had a nice deep, sultry voice which was a nice addition to the mix.

We then headed back to the House of Vans for a heavy Chicago hip-hop/rap lineup, starting with Joey Purp. We arrived a little late, but the crowd was already very hyped up by that point. The highlight of his set was when he asked the crowd, “Where the girls at?” The response was thunderous as the crowd knew he’d be playing his hit song “Girls @.”

The last show we saw was another Chicagoan and frequent Chance the Rapper affiliate, Noname. Noname’s most recent project, Telefone, received critical attention, garnering solid reviews across the industry, so it was quite special to witness this album’s tour. Noname’s brand of blended smooth R&B and gentle rap was beautiful to see, she hyped the crowd up like Joey Purp but pulled on their heartstrings like Chance the Rapper is known for. Noname played almost her entire album, and did a couple encores. To close out she played “Shadow Man,” for the third time, bringing out Phoelix, Smino, and Saba, who had a set earlier in the night. It was the highlight of the night for sure, an incredible performance by all artists and especially Noname.