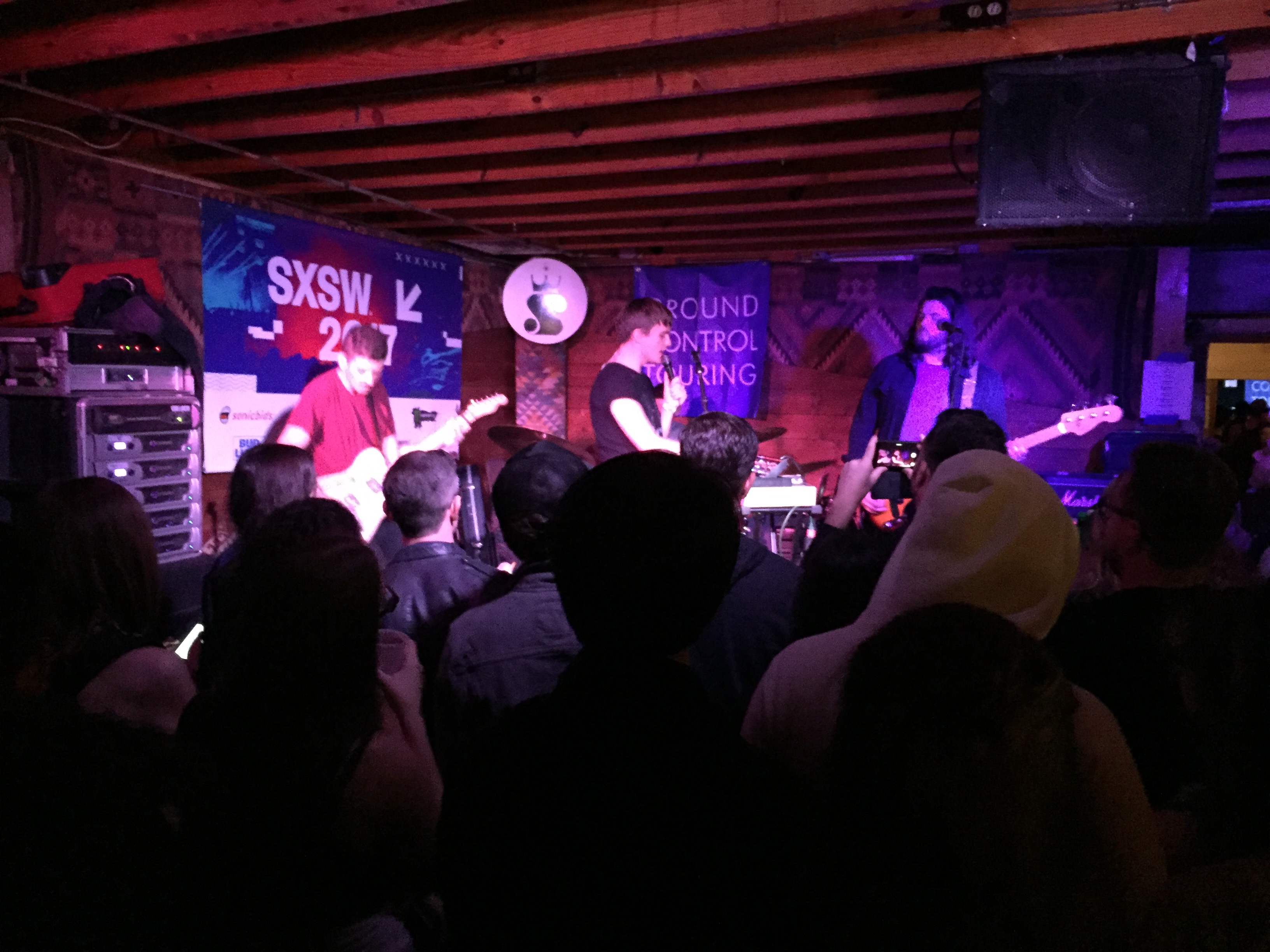 To start the day off, the Northern Transmissions crew went to see a Canadian band, Twist. They were the first of a stream of bands at Bungalow, a backyard-type venue part of Collide’s larger collection of bars. The event was a Dine Alone and Buzz Records collaboration. Twist really epitomized that dreary, dreamy sound indie rock bands of late have started to provide – Mac Demarco, Real Estate, and King Krule come to mind as more veteran comparisons. All of Twist’s band members – Laura Hermiston (Guitar, vocals) Sara Fegelman (Drums), Patrick Grant (Bass), and Matt Buckerberrough (Guitar) – were dolled up in lipstick, eyeliner, and painted nails, giving the set a very glam-rock aesthetic. It was a solid show that received a warm welcome.

The next band at the Dine Alone and Buzz Records party was Måntra, an alt-rock trio from Ealing, London, UK. There was a bit of a holdup as lead singer and guitarist, Simon Stark, broke a string after just the first song, though he quickly recovered. The band really put the amps to the test, as their brand of heavy, hard-hitting alternative rock pumped energy into the venue. Rob Emms was bringing out the most sound possible from his kit, and bassist Rich Leeds kept pounding the strings. Stark showed off the power of his voice, sometimes being very strained before bringing it back to a graceful, softer level. They closed out their set graciously, but powerfully, as they are known to do.

After Måntra, the crew headed over to Valhalla on Rainey Street to see She-Devils. Rarely do you get to see performances like the one She-Devils put on, people not in attendance missed an absolute gem. The Montreal duo of singer Audrey Ann Boucher and DJ Kyle Jukka describe their genre as cave rock, but they could also be called a minimalist pop group.

Boucher’s vocals were perfect, to say the least, and Jukka created a symphonic, synthy backdrop for their music that blended nicely. They closed out with their hit song “Come” before receiving a wild applause from the crowd, Boucher and Jukka’s emotionless faces were broken as neither could help but smile, they certainly please the audience. She-Devils really represent the brilliance coming from modern times’ bedroom projects.

The next band up at Valhalla was Half Waif off of Arbrutus records, lead by the beautiful Nandi Rose Plunkett, whose delicate yet powerful voice rang through the venue.

The entire band had a very technical setup, including lots of pedals and modifiers. Half Waif heavily incorporate synthesizers in their songs, but their sound remains quite upbeat, and sometimes even clubby. Overall, the band made it very easy to vibe along, and their harmonizing was beautiful – their sound is comparable to New Zealanders, Tamaryn.

Lastly, Northern Transmissions headed over to Sidewinder to catch post-punk legends, Merchandise. Unfortunately, they had to go through a lengthy sound check, which ultimately shortened their set. However, they were still able to play four songs. As per usual, Carson Cox offered soothing vocals, contributing to their unique blended style of alternative punk-noise rock, and guitarist Dave Vassalotti basically shredded through their entire set. Cox laughed off the shortened performance, and rewarded the audience by closing with a requested song yelled out by an audience member.

Before heading home for the night, we caught the end of Allison Crutchfield and the Fizz on the outdoor stage at Sidewinder. The indie rock outfit was in the middle of a very upbeat set to adoring fans. Allison Crutchfield’s sister, Katie, is another notable indie pop-rock artist, Waxhatachee – clearly there is a lot of talent in the family. We were lucky to catch some beautiful, long guitar ballads from Allison before the band closed with one of their most popular track, “Dean’s Room,” a bouncy, melodic tune off the group’s new album, Tourist in This Town, which came out in January.

And so another incredible day at SXSW in Austin, Texas came to a close. Check back here tomorrow for a recap of today’s bands.