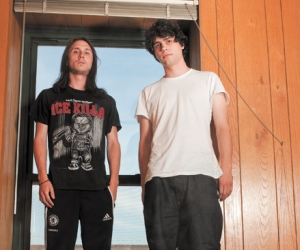 Supreme Cuts, the Chicago-dwelling production duo of Mike Perry and Austin Kjeultes, announce their sophomore long player, Divine Ecstasy, today. Slated for an October 1st release on Brooklyn boutique label Dovecote, the record sees Supreme Cuts further extending their productions into the worlds of house music and footwork (both historic staples of their hometown) while experimenting with pop structures. The appreciation for off-kilter time-signatures and complex phrasing that defined their debut album, Whispers In The Dark, aren’t absent but rather harnessed and disciplined, contrasted against some of the most musically approachable compositions they’ve written to date. Studying piano and citing influences as diverse as Herbie Hancock, and Prince, Supreme Cuts emerge from the haze of their prior releases with a confident stride.

Contributing vocalists, including Channy from Polica, Shy Girls, rapper Haleek Maul, and promising French singer Mahaut Mondino (among others), aid in delivering a fully-formed vision, a piece of art with hundreds of details to interpret both in and out of a literal context. An exercise in transcendent songwriting, the album addresses the diverse strata of human experience and interaction from the mundane to the supernatural and everything in between. The title is a reference to an infomercial in which a pastor named Peter Popoff peddles a miracle water that will deliver free money and immerse the buyer in a “divine trance”, infer from that what you will.

Audiences will be able to experience Divine Ecstasy in person this summer as they play their festival debut at Lollapalooza, then join AlunaGeorge on the UK electronic singer-songwriters’ headlining jaunt.