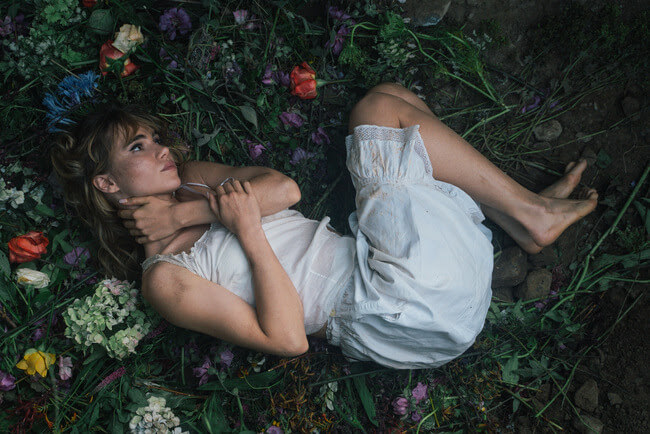 Suki Waterhouse shares "Nostalgia" video. The track is off the UK singer/songwriter's forthcoming album Milk Teeth, out 11/4 via Sub Pop
Share on TwitterShare on PinterestShare on PocketShare on RedditShare on FacebookShare on Email

Singer/songwriter Suki Waterhouse unveils the video for “Nostalgia” today, directed by Émilie Richard-Froozan and filmed in Ireland. “I’m so happy to share the ‘Nostalgia’ video directed by Émilie Richard-Froozan,” Waterhouse says. “It’s the fifth video we’ve collaborated on together. We spoke a lot about how nostalgia is a place you go, a destination. That living there is a choice one makes unapologetically. To live in nostalgia is to dig your own grave, and that’s exactly what I did. The silver lining is that only you can dig yourself out again.”

“This is the story of a woman writing a letter to her childhood love telling him that she’s getting married,” Richard-Froozan says about the video. “She hasn’t heard from him in years and often wonders what might’ve been. I wanted something sweeping and epic and unapologetic. When Suki sent me the song, I was driving through Doolough Valley and the landscape here fit the mood of the music so well. The lake in Doolough had my mind gravitate toward the story of Orpheus & Eurydice and crossing the river Styx. We were also highly influenced by Wuthering Heights and the cliff scene between Heathcliff & Cathy. The whole experience was pretty magical, like the last week of summer camp with a group of old friends.”

Waterhouse recently confirmed a new EP, Milk Teeth, for November 4 via Sub Pop Records. The album features five songs from Waterhouse’s early career plus one new track “Neon Signs” and will be available on vinyl.