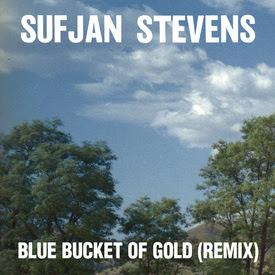 Sufjan Stevens shares a new remix of “Blue Bucket Of Gold” from his album Carrie & Lowell, today. Featuring members of Stevens’ touring band, the remix was recorded while on the road by Tucker Martine in Portland, Oregon and at Stevens’ studio in Brooklyn and is an interpretation of the band’s live version of the song. Carrie & Lowell was recorded by Stevens alongside Casey Foubert, Laura Veirs, Nedelle Torrisi, Sean Carey, Ben Lester and Thomas Bartlett. Named for Stevens’ mother and stepfather, the 11 songs address life and death, love and loss, and the artist’s struggle to make sense of the beauty and ugliness of love