Vancouver band Little Destroyer have shared a new video for their latest single “sucker4u.” The title-track is off the high energy trio’s forthcoming album, which is now available via across all streaming services with TINY KINGDOM. SUCKER4U, is described by the band as “a chaotic ode to jumping headfirst into love and lust and the trials and tribulations of being head over heels”.

The Canadian three piece fill every room with an intense energy. In ‘sucker4u’, we witness Little Destroyer doing just this with a sound that is simultaneously reminiscent of Sonic Youth and Yeah Yeah Yeahs, while coinciding with modern contemporaries such as Dream Wife & Amyl And the Sniffers.

Where their last single ‘Love and Anarchy’ celebrated unconditional love and the journey that takes you to it, ‘sucker4u’ portrays the chaos of feeling deeply in love and lust – with lust making you behave like an animal and falling in love feeling as though you are a slave.

Talking about the track, Allie says: “Perfect that the song that almost broke up the band is about the most all consuming, overwhelming human experience; love. Nothing is more adept at turning reasonable people into absolute bumbling fools. Like a suddenly implanted self-destruct button. This song was a coming-to-terms with the reality that I was now an absolute love-sick sucker. Pathetic.”

And when mentioning the music video: “And in a twist that makes almost no sense, here’s a video where we are dressed up as ‘Ace of Spades’ era Motorhead, stumbling upon a pool party. Enjoy!”

Allie speaks unapologetically on feminism and empowerment. Allie, along with brothers Chris and Michael Weiss, are multi-instrumentalists who grew up playing in punk, psych, and rock and roll bands, later venturing into alt-pop, inspired by Soulwax Night Versions & Charli XCX. 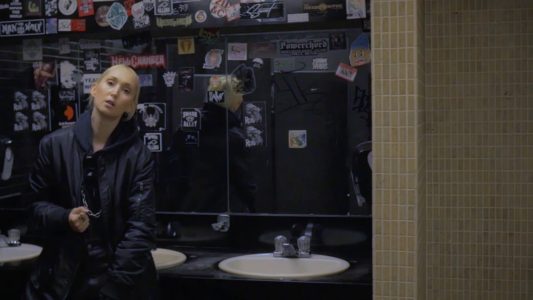