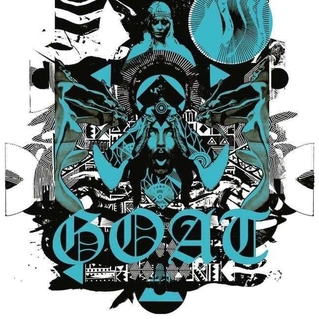 Sub Pop is releasing ‘Goat’ throughout North America with the double-A-sided”Dreambuilding”/”Stonegoat” 7”, out June 4th on Sub Pop Records. This is Goat’s first North American release, and comes hot on the heels of the bands 2012’s import-only psychedelic opus, World Music.

Goat will kick off a 10 date US tour starting next tuesday in Brooklyn, with performances at this years Psych rock fest in Austin Texas. See below for a full list of dates.

Goat are a collective who hail from a small and very remote village in deepest darkest Sweden.

Legend has it that, for centuries, the inhabitants of the village were dedicated to the worship and practices of Voodoo. This strange and seemingly-unlikely activity was apparently introduced into the area after a travelling witch doctor and a handful of her disciples were led to the village by following an unknown Sami traveller from this area of Sweden.

The reason he led them there is unknown, but their Voodoo influence quickly took hold over the whole village, and so they made it their home. There they were able to practice their craft unnoticed and unbothered for several centuries. This was until their non-Christian ways were discovered by the Church and they were burned out by the crusaders. But the survivors returned to the village, rebuilt it, and to this day the now-picturesque village is still influenced by the power of Voodoo; this power can be felt throughout the grooves of the Goat records.