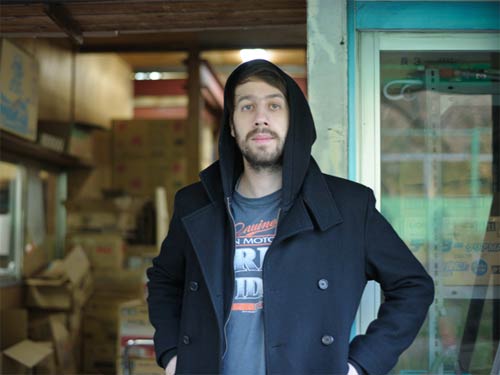 Electronic artist Gold Panda is set to release a 12″ of all-new material, entitled the Trust EP. The 4 track collection is available now digitally and the 12″ for pre-order at The Ghostly store HERE. The vinyl version will be released March 4th.

The EP is available to stream in full via Gold Panda’s website HERE.

In addition, Gold Panda has just announced a headline London show as well as dates in Australia, New Zealand and North America. The show at Brixton Electric is his first London headline show since a sold-out Koko date 15 months ago. Full touring dates are below.

Creating the EP was about “trusting yourself that something is good,” according to Derwin AKA Gold Panda: “[It’s about] trusting your instincts. I make a lot of music but not much gets to see the light of day,” he added. “…[But] I trust my judgment that these tracks are worthy enough to commit to vinyl.”

The process of recording the tracks for Trust involved a step back a previously regimented routine of studio time each day:

“The inspiration was just getting away from computers/laptops made my arrangements a bit more free and natural I think. Just jamming and looking out my window. Then taking a walk to see what I recorded, going back and copying the live arrangement. (Apart from ‘Casyam_59#02,‘ which is my mate showing me the sounds his Yamaha keyboard could make over a loop I made with a cheap Casio one).” “I think I’ve stripped out a layer of my music since Lucky Shiner, maybe it was feeling too cluttered. I think these tracks and the tracks for the new album have more space, but don’t feel empty.”

The EP is his first release since the short-run “Mountain / Financial District” 7″ that emerged last May, and is set to be followed later this year by his second full-length album.

Ghostly will be releasing the EP throughout North America and mainland Europe. In the UK, the 12″ comes out on Gold Panda’s own label NOTOWN, which has recently released an album by Dam Mantle and a pair of EPs by Luke Abbott. Further releases are lined up in 2013, including the debut of Hamburg musician, Hannes Rasmus. This spring will see a raft of new Gold Panda headline shows. Full dates are below. More dates, including further summer festivals will be announced soon.

3. Burnt-Out Car In A Forest