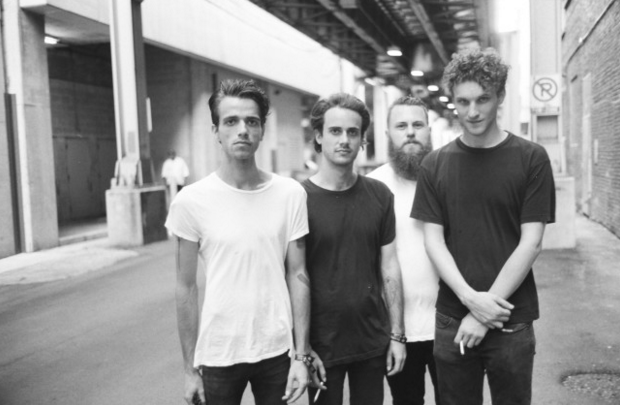 On the eve of their arrival back in the states, Sydney-based quartet Spookyland have shared new single “Big Head”. Along with their appearance at SXSW the band will also be supporting Jake Bugg for his Chicago and New York dates and playing a headline show in New York.

You could say that “the silly fucking thing” isn’t a phrase many people would reach for to describe their (repeatedly) broken heart. And you’d be right. But 23-year-old Australian Marcus Gordon isn’t interested in the routine or regular. As the singer and songwriter of Spookyland, he wrangles profanity, twisted beauty and a fascination with life’s paradoxes into the service of highly personal, vividly distinctive poetry and compelling songcraft.

Gordon started writing songs when he was just 11, inspired by his two musically experienced older brothers, one of whom – Liam – is Spookyland’s guitarist. “I went straight to writing, even before I could sing or play,” he explains. “Music was always around and I loved the feeling of creating something – even if that was just a noise – and I didn’t question it. I always wanted to do it.

Gordon’s first recording was an EP (since vanished) called “Killing One Bird With Two Stones” and in order to play the songs live, he brought in Liam on guitar, plus a temporary rhythm section. The change (“a lot heavier and more intense”) was a turning point for Spookyland the band. They soon fixed on bass player Nic Malouf and drummer Nathan Mansfield as permanent members, and in 2014 released the “Rock and Roll Weakling” EP, featuring “The Silly Fucking Thing”. Now, the four take what Gordon claims are his “tinny, flat-out country-folk ditties”, written on an acoustic guitar and create “as much explosiveness underneath that as [they] can.”

“My voice has never been formally trained,” he says. “I started with literally making noises in the bedroom, with a guitar, and focused on the feeling of that – even if it was horrid, like you wouldn’t want to sleep next to it. It wasn’t singing; it was akin to chanting and crying at the same time. But I knew if I could train myself to sing songs in that voice, it might resonate with some people. I knew that was fulfilling something for me, so to keep doing it was also just in case anyone else needed that. It’s taken me years to even be able to hold a note and my voice is constantly shifting, with the emotions of new songs.”

Beauty Already Beautiful was recorded in Omaha, Nebraska and produced by Tony Buchen at the Saddle Creek compound, where Spookyland lived while they worked. It features a guest spot from Bright Eyes mainstay Mike Mogis, who plays pedal steel on “Prophet”. “He was very mysterious about it, too, locked in his studio at odd hours for five-minute increments; I don’t think we even heard what he’d done until we got back to Australia. It’s such a beautiful touch.”

Lyrically, the album ranges far and wide: it addresses the cost of doing exactly what you want with your life (“Nowhereland”); gender differences in so-called acceptable behaviour (“Big Head”); what Gordon calls the “tension and separation that goes on in Australia”, plus an attempt to tear down its archetypes (“Prophet”); and to-hell-with-the-world self-destruction (“Bulimic”). According to the singer, “Most of these songs are trying to celebrate something that probably shouldn’t be celebrated. They’re creating a parade out of one bad moment. It’s like when the coach comes into the locker room and gives the team a pep talk – but here, it’s a talk that says, ‘go get really unhealthy’ and ‘hate yourself forever’. That’s the feeling.”

Despite having much more than an album’s worth of material in stock, Gordon wrote 11 new songs in a short span of time, to ensure that they were “part of the same ecosystem.” Two things were key to Beauty Already Beautiful – Hermann Broch’s novel from 1945, The Death Of Virgil and Patti Smith’s work. Of Broch’s book, Gordon says, “It has this idea running through it of poetry being the biggest vanity man could possibly ever find himself engaging with. It’s like when you start to question talking about a flower for six lines in a poem and spending four days on that. You’re trying to describe its beauty, when it’s already beautiful. It’s putting yourself in front of God – or any kind of force, or even the thing itself – and making yourself more important, by writing about it. That was going through my mind in terms of how I was dealing with the world and things going on in my closest relationships. I’m really having a go at myself in all the songs.”

Patti Smith was inspirational not only in terms of her poetry and music, but also her life, as revealed in her biography. “She was a huge influence,” Gordon enthuses, “in how transparent she was about how she got to where she was and what she read and her idea of the afterlife being within the world… she’s constantly doing these weird rituals that aren’t tied to any religion, like going to graveyards. I read Just Kids and then went a bit nuts on her poetry books and heard her records in a new light. Patti Smith’s poetry is very surreal, which I like and it’s got great form; you can discern the discipline.”

“Spookyland is about trying to make life seem more interesting. The world becomes weird when you think about it in a different way, so for me it’s trying to push beyond life, without dying, to slightly dip into the psychotic or spiritual world. I don’t know if that’s romanticism, exactly, but it’s the point where you’re half in and half out of the world, at the same time.”