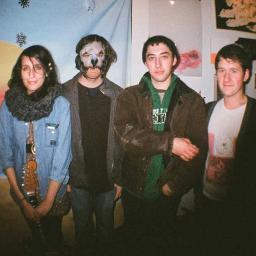 Carpark has unveiled the second single from Speedy Ortiz’s forthcoming full-length debut. Major Arcana, in the form of “No Below”, which offers a glimpse at the more introspective side of Speedy Ortiz. Major Arcana is due out July 9th. The band will hit the road for a nation-wide tour later this summer, details of which will be announced in the coming weeks.

Major Arcana marks the evolution of Speedy Ortiz into a wholly collaborative effort.  Bassist Darl Ferm (ex-Day Sleeper), drummer Mike Falcone (Dead Wives, Ovlov), guitarist Matt Robidoux (ex-Graph, Banjo Assault), and Sadie on vocals and guitar recorded the album in November 2012 at Justin Pizzoferrato’s (Chelsea Light Moving, Dinosaur Jr.) studio, Sonelab. The huge space in an old factory set the stage for many long sessions allowing the band to experiment and further solidify their sound. It’s easy to hear the influences of Helium, Jawbox, and Chavez, on this album, as well as nods to their contemporaries including Grass Is Green, Pile, and Roomrunner, but their sound remains playful, modern, and decidedly their own.