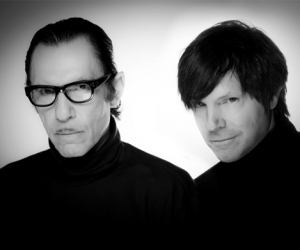 In response to the overwhelming reception of Sparks’ last North American tour — not to mention the band’s recent Coachella debut — L.A.’s pop provocateurs Sparks are excited to announce a brand new fall tour. Returning to North America with The Revenge Of Two Hands One Mouth Tour, brothers Ron and Russell Mael have crafted new sets of material drawn from the band’s extensive discography and back catalogue. With no band and no computers, Ron (two hands . . . on keyboards) and Russell (one mouth . . . on vocals) will present the very essence of Sparks and their impressive catalogue in a show of impact, energy and aggression.

“For those who saw the tour in its first incarnation, we promise to keep the intensity up, the two-hands, one-mouthiness up, the no-computeriness up, and also perform a bunch of tunes not played on the original tour,” says Russell Mael. Full tour dates below.

Over the band’s four decades of existence, Sparkshas consistently proved to be ten steps ahead of their peers, pioneering and transforming in ways few would’ve ever predicted. Enigmatic and shape-shifting, Sparks has defined numerous genres, ranging from the psychedelic rock of 1972’s A Woofer In Tweeters Clothing to 1979’s landmark Giorgio Moroder collaboration No. 1 In Heaven. They’ve written a Swedish rock opera (The Seduction of Ingmar Bergman), synth-pop opuses (Gratuitous Sax and Senseless Violins), and even helped define the sound of U.K. glam (Kimono My House) — nevermind that the duo hail from Los Angeles. The band’s recent work found Sparks exploring the depths of baroque pop, a sound defined by their album trilogy of Lil Beethoven, Hello Young Lovers, and Exotic Creatures of The Deep,