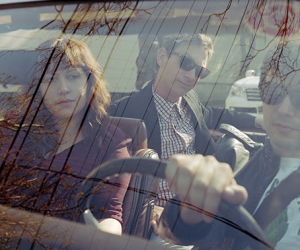 Today Sonny & The Sunsets share “natural acts,” their third video from their latest album, Antenna To the Afterworld — a story about a goofy tennis match gone awry.  The band has also added new tour dates, most of which find them opening for Kurt Vile in the Midwest and Southwest in August.Death? Afterworld? Android lovers dying in the streets bleeding green blood? Homeless girls? Dogs stranded here from other planets? What are Sonny & The Sunsets getting at on Antenna to the Afterworld, a fast­moving record of new wave synths and post punk beats?

The murder of a close friend of the band led Smith to think a lot about death and life after death. Shortly after, a visit to a psychic/medium brought Smith into contact with another friend who had died. This encounter with the afterworld inspired many of the lyrics on Sonny & the Sunsets’ new record. And what a strangely entertaining odyssey it turned out to be. As a writer ­­ of songs, or plays, or short stories ­­ Smith has never limited himself to one style or theme. The restless trend of changing gears dramatically continues on Antenna to the Afterworld, which marks a total musical and narrative shift from last year’s Longtime Companion (a country record that chronicled Smith’s break-up).

On Antenna to the Afterworld, Smith likens himself to a space being visiting Earth using wry humor, gritty poetry, and a myriad of musical lenses fleshed out by drummer Kelley Stoltz’s Joy Division-­like beats, Ryan Browne’s new wavish basslines, and Tahlia Harbour’s deadpan vocals. “I come from the planet of dogs / … / And I walk on your streets / … / and I can’t wait to find / My little place in your weird world,” Smith sings on opening track “Dark Corners,” as the song’s use of synthesizers lends the perfect sonic counterpart to the science fiction narrative.

It wouldn’t be a Sonny Smith­-penned album without a reworking of a previously released song. Just like “Pretend You Love Me” was transformed from a 50s doo­wop revamp (on Hit After Hit) to a Dylan­esque country ballad (on Longtime Companion), on Antenna to the Afterworld Smith sheds the ramshackle country rock skin “I See The Void” wore on Longtime Companion and replaces it with a raucous high energy romp through classic Sunsets territory.