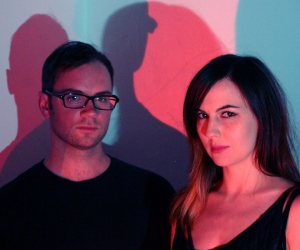 LA’s Soft Metals formed in 2009 after Ian Hicks and Patricia Hall met at a DJ night and connected over their obsession with analog synthesizers and the shadowy, sultry, untamed expressions of underground electronic music. Their early collaborations paired Patricia’s delicate vocals and introspective lyrics with Ian’s solo sketches. Soon they moved on to writing music together, building songs from wild, improvised sessions in Ian’s home studio. Their genre-blurring brand of voltaic pop draws inspiration from a spectrum of sources including krautrock, synth wave, and techno. They’ve won over audiences in situations as varied as experimental noise shows in dingy basements, to sleek, modern nightclubs, to clandestine after hours warehouse parties, to dimly lit dives where post punk and synthpop records fuel the dance floor.

Soft Metals found a home on Brooklyn’s Captured Tracks with the 2010 EP The Cold World Melts. The following year Hicks and Hall presented us with their debut self-titled long player; an album steeped in driving beats, maximalist textures, and the perfect placement of Hall’s atmospheric vocals.

July 2013 will see the release of Soft Metals’ next installment, Lenses; a continuation of their ethos aiming directly at your body and subconscious mind with an intimacy that only lovers can bring. The song “Lenses” describes the experience of shifted consciousness with the lyrics “breaking through my perception of you, breaking through my concept of life”. It celebrates the feeling of escape from a mind imprisoned with lack of presence and stuck in habit all set to an earnest beat and lush enigmatic melodies that entwine and seduce. “Tell Me”, “No Turning Back”, When I Look Into Your Eyes” expresses that nervous, vulnerable feeling of falling for someone, but questioning the reality of the situation asking “Is this love true? Or are we just lost in lust?”, “when you said you loved me, I laid my whole life down”, “When I look into your eyes, I wonder if we’ll meld”. “In the Air”, perhaps the most movement inspiring track of the album, is a dense, pulsating piece about the power of nature, the effects of seasonal changes on all living things that rule over sexuality, productivity, and inspiration- the basis of man’s various forms of mysticism.