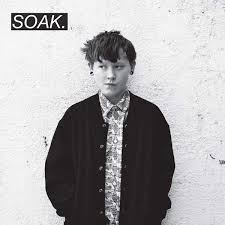 Bridie Monds-Watson aka: Soak, has unveiled the video for her single “Blud”, ahead of her album debut via Rough Trade. Before We Forgot How To Dream is out on June 2nd.

The video was shot in Derry, London, and her UK tour of skate-parks, the clip for “Blud” documents SOAK’s start to 2015.

“Blud” was  written shortly before her parents separated, after Bridie, then a young teenager, had overheard them arguing while laying on her bedroom floor. It’s a striking snapshot of any relationship in distress.

Her debut album, Before We Forgot How To Dream may initially appear nostalgic –romantic, even – for a more innocent time. But despite the darkness and tumult lurking beneath the record’s surface, there is a persistently uplifting element to her music. Bridie expands on this and explains that…“people grow up and nobody believes in Magic anymore, or you’re told to lower your expectations and that certain behaviour isn’t appropriate. This album is definitely about that time when you believed a bit more in things.”