Electronic duo Snowday came upon the inspiration for the project in an unlikely source: a ukulele they picked up in Madrid, Spain while traveling in Europe together. Without a studio to record in while on the road, Cam Sloan and Chad Skinner found a new creative spark in going back to basics and jamming with small acoustic instruments they collected throughout their travels. This newfound appreciation for acoustic textures and live instrumentation greatly coloured the material they recorded once they returned home, which ended up becoming Snowday’s first songs. Listen to the band’s single “A Quiter Winter” from As We Travel below.

Their debut album, out today, titled As We Travel, is chillout music that is as sensual as it is psychedelic, perfect for the upcoming winter season. Swirling synths and laid back guitars swim in washes of liquid reverb and sparkling delays, gently propelled by pulsing rhythms. Their closest musical relatives are chilled out electronic artists like Bonobo and Tycho, with occasional nods to ambient pioneer Brian Eno and minimalist icon Steve Reich.

Sloan and Skinner have been making music together in various projects since meeting in high school in Ottawa and bonding over a mutual love of underground hip-hop, which led them into sample-based production. Later inspired by the records they were sampling, with a desire to become better performers, they taught themselves to play their own instruments. The duo began recording piano, guitar, drums, and other instruments to generate their own samples, which helped lay the foundation for Snowday’s live organic approach to ambient pop. As a live act, the addition of drummer Tait Rowsell pushes their sound in more assertive and upbeat directions, without sacrificing the subtle atmospherics of the recordings. Snowday on stage is much more a band than a laptop act, although both Sloan and Skinner can still be found in the DJ booth on occasion as well.

The band has also announced a run of  tour dates in support of the album’s release, all of which can be found below.

As We Travel is out today. 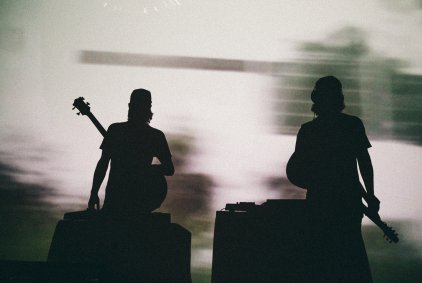