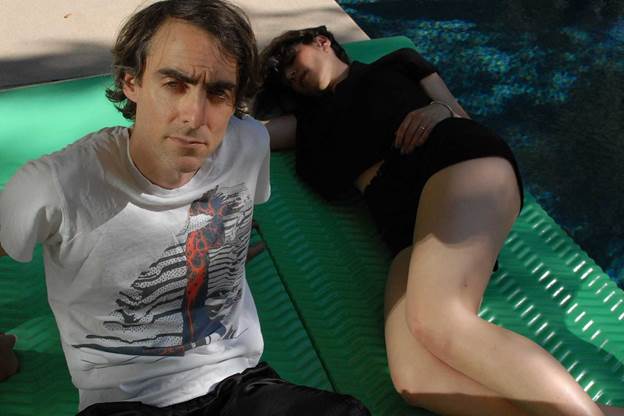 Snowblink’s Returning Current, comes out September 9th via Outside Music, the Toronto / Los Angeles duo of Daniela Gesundheit and Dan Goldman began the recording process with a text based ‘mood board’ developed by Gesundheit to portray the sensations she wished to evoke in the production of the album. The musicians, producers, and engineers were faced with the task of sonically approximating themes of santa fe / arizona / palm springs / calypso disco / lots of space with bursts or ripples of sound.

Practically, this ambition meant that the band approached each song uniquely – here a full band live off the floor in a winter cabin, there a painstaking half-year-long process of revision, here a drum sample from years ago mixed with dozens of layers of analog synths and vocals. In sculpting the singular sound of Returning Current, no process was out of bounds – the band made themselves equally at home with a bevy of acoustic instruments, analog processes, or sample-based in-the-box production choices.

Earlier, the band shared album opener “How Now”, today they have revealed “Feel Like A Man”, a song that “came out of a sort of ambition-exhaustion, a masculinity burnout – career-related, especially,” says Gesundheit. I wondered if other women felt similarly, that they had to figuratively and energetically be ‘in drag’ to get their voices heard. I pictured myself as a man, feeling both the elation and intense frustration of being powerful. The lyrics are buoyed above a repetitive synth pattern and relentless groove – a kind of echo of foot soldiers going out each day to conquer based on orders from above without being entirely clear on what the war is all about.”