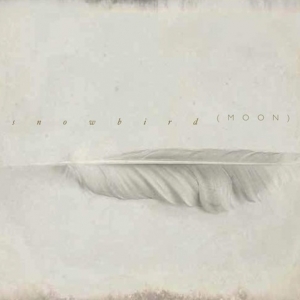 Born from love, musical empathy, a baby grand piano discovered on Gumtree and an expired visa, Snowbird duo Stephanie Dosen and Simon Raymonde have crafted an album of exquisite melody and mood that radiates the uncanny mystery of the object it’s named after: moon.

Released February 4th, 2014 on Bella Union, the label that Raymonde has curated and run since his former band Cocteau Twins went their individual ways in 1997, moon comprises 11 songs composed between two continents; Raymonde was in London while Dosen was in North Carolina after being based in the capital following her 2007 debut A Lily For The Spectre. Snowbird’s album was subsequently crafted via the wonder of technology, and yet moon has one unifying and intimate sound and vision, from gently pulsating, pop-centric trails to lingering, luminous ballads.

“Having them add their magic to the record was a thrill, but really, I think this is very much Stephanie’s record,” Raymonde points out. “She’s a really special singer and I feel the simplicity of my music was the perfect backdrop for her stories and her incredible vocal arrangements.”

The pair’s first connection was Raymonde’s discovery of Dosen’s music and subsequently producing her debut album and releasing it on Bella Union. ‘Stephanie was the first singer I had worked with since Elizabeth [Fraser of Cocteau Twins] that I had a real musical empathy with,” he admits. “She could do anything. No one had ever sung with Midlake on record before Stephanie, while Massive Attack asked her to be their lead singer on tour – ironic really given that Elizabeth had too! She also sang with the Chemical Brothers. But we’d never written music together at home.”

Raymonde no longer had instruments or microphones in his flat until he saw an offer of a baby grand piano that was free apart from transportation costs. Once it was installed, he slowly began to play again. “I never intended Cocteau Twins to be my last band,” he says, “but frankly I wasn’t just going to jump back on any old nag just for the sake of it.”

It was fortuitous that he had the baby grand for company when Dosen had to return to the US to reapply for a visa. Once there, she started receiving emails, “short piano pieces, every night for 12 days,” Raymonde recalls. “And each morning, I’d wake up to an email of my piano piece with these amazing vocals that she’d recorded in North Carolina. After two weeks, we had the basis for what now makes up moon.”

“I wrote every piece of music at night, in semi-darkness so that the space didn’t feel like my living room,” says Raymonde. “The moon was very important for the light it reflected.”

“All the stories on the record are night-time stories, forest-y and moonlit,” Dosen adds. “The moon only shines because it is being seen by the sun – I like the idea of that sort of illumination of an object or a person. It’s almost like being seen makes us shine.”

moon will be released in double-disc format complete with a bonus album. The second is called luna, an album of remixes (one for each 11 tracks) by Michigan’s electronic luminary RxGibbs, who expands, annotates and shines a whole new light on the wonder of Snowbird, adding and subtracting beats, creating otherworldly ambient passages, and building the other half of a distinctly beautiful, passionate whole that gives a whole new meaning to the term “moonstruck”.

moon will be released February 4th on Bella Union.