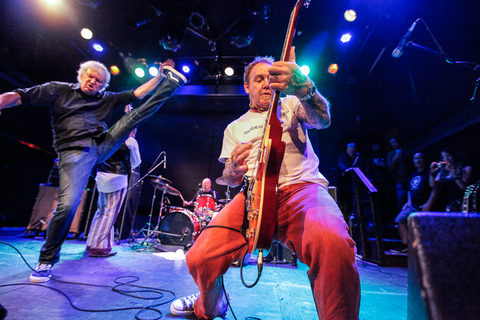 Calgary’s music festival Sled Island continues. After pouring rain all Friday long, Sled-goers were looking to dry out and catch a break from the wet stuff on Saturday. They didn’t get one. Weather turned for the worse and unleashed more relentless precipitation just as the gates to Olympic Plaza were preparing to open Saturday afternoon. The rain had an understandably negative affect on the early crowd numbers in the Plaza, and the few that braved it were left standing in a veritable wading pool as North Hampton’s Speedy Ortiz took the stage. The audience was rewarded though for their patience and determination as the sun broke through and the rain let up just as Sadie Dupuis and her band kicked off a raucous set. The ambidextrous guitar work from the front woman and a solid mix of favourites and new tracks, bangers and ballads, coaxed the crowd to come out from where ever they were hiding and participate. Then just like that, they were done – and the rain, right on cue, started back up again.

It didnt seem to matter by the time Montreal’s SUUNS took the stage, and indeed the deteriorating weather was almost fitting for the mood. SUUNS play dark and brooding rhythm heavy psych rock that has been winning over fans and critics since 2007. Their set here was easily a weekend highlight – evoking bands like CAN and Radiohead all while doing something very much their own. Claustrophobic vocals cloaked heavily in throbbing synths and arpeggio guitar work seemed just the right tonic for embracing the clouds and rain.

By the time the highly anticipated and venerable headliners Guided By Voices took the stage, the sun was setting and the plaza bowl had filled up nicely. Indie rock god Robert Pollard launched us through a hit filled retrospective of GBV’s dizzying catalog, cramming as many of the signature straight forward pop sermons as they could in their allowed 75 minutes. Stopping only for quick beer and tequila breaks, Pollard high kicked his way through song after glorious song as a delighted crowd watched the hero of the their youth remind them why this band is so vital to so many of us still.

Over at the Legion upstairs, Saskatoon riff-mongers Shooting Guns pleased the metal loving audience with huge drop chord guitar work and pounding stoner rock. They pummelled the willing crowd in preparation for the nights big name – Deafheaven – who took the stage just down the stairs. The San Francisco band have been critical darlings for the short six years since forming, something clearly not lost on the audience as they packed in tight to catch the wall of sound the band has become known for. Part black metal, shoegaze, and post rock – Deafheaven blasted us with massive expanses of guitar and relentless scream style vocals. Theatrical front man George Clarke held the venue captive in his emotional grip. Deafheaven doesn’t let up until its time to go home, and once they do, we – like the band – were wonderfully spent.