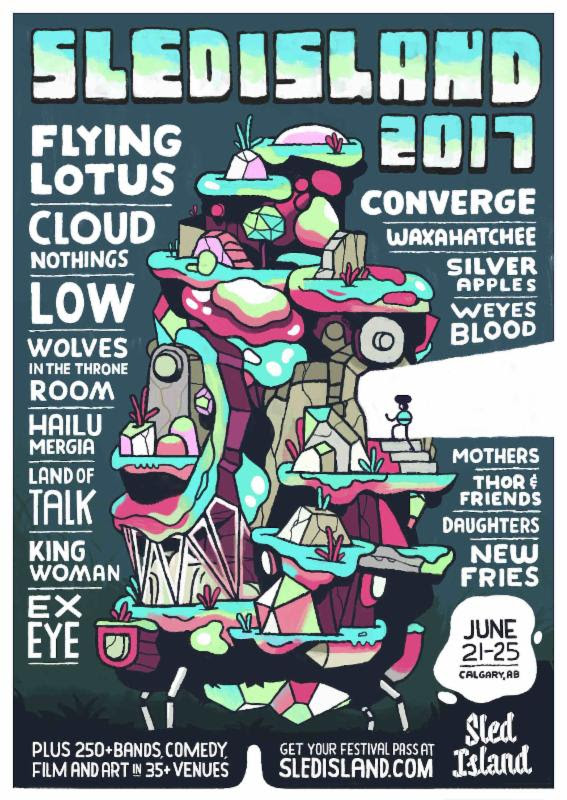 The Sled Island Music & Arts Festival is pleased to announce its first wave of 2017 artists. The annual festival sets itself apart by presenting a thoughtfully-chosen lineup of music, comedy, film and art in more than 35 venues across Calgary, Alberta each June. The artists announced today represent just a sample of the 250+ bands that will descend on the festival from June 21 – 25, 2017.

Recently, Sled Island announced visionary producer, rapper, DJ, label owner and filmmaker FLYING LOTUS as 2017 guest curator. Each year, Sled Island’s guest curator puts their stamp on the festival through special programming choices and with their presence at the event. Flying Lotus’ curatorial selections will be announced in the coming months, along with other festival acts, including additional headliners.

PASSES AND TICKETS
Sled Island passes are on sale at 15% off until March 13, 2017 at the official Sled Island website.

Sampler Pack ($112): Not sure where to start at Sled Island? Let us be your guide! We’ve handpicked nine of the festival’s hidden gems to give you a taste of the Sled Island experience. Show details will be released alongside the Sled Island 2017 schedule in late spring 2017.

All-Ages Pass ($35): Exclusively for attendees under 18 years of age! Access more than 50 all-ages events for the price of a single show ticket.