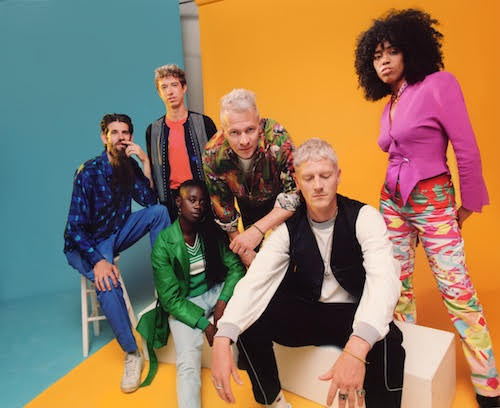 Franc Moody will release Dream In Colour on February 28th via Juicebox Recordings. The album follows the London band’s previous single “Terra Firma.” Franc Moody had a busy 2019 with a run of US dates and lengthy European tour. Fans can grab a listen to “Skin on Skin,” ahead of the release of Dream in Colour.

Franc Moody rose from the tight-knit warehouse rave scene of London, their performances are all about catharsis and chaos. These hypnotic and free-form shows – members have been known to suddenly swap instruments or play keytar solos while sat on each other’s shoulders – have helped them build a cult following. Each gig feels like a gigantic house party, packed with scenes of crowd surfing, mosh pits, mass sing-alongs and chants of “MOODY! MOODY!” This is where the band feel most at home and it informs one of the many themes running through their forthcoming debut album, Dream in Colour: the experience of letting loose together.

Franc Moody met as part of a group of musicians who took over an abandoned warehouse in Tottenham, London: first throwing raucous parties, then cutting their teeth as a live outfit, and gradually articulating a more socially-conscious lyrical concern through Franc Moody’s irrepressible floor-fillers. The other members of the band – Luke on guitar, Rosy on bass, Dan the drummer and Amber-Simone on percussion all found their home in Franc Moody via related projects using the same warehouse space.

Dream in Colour, then, isn’t just about togetherness. It will also explore the way in which modern life constantly oscillates between online and offline realities; from the world we navigate inside our phones to the one we explore each day with our physiological senses. What separates our emotional experience of things like friendship, love and community online versus those we experience IRL? “Sometimes,” explains Ned, “that experience of switching between those two worlds can feel like changing from black & white to colour. We wanted to explore that phenomenon on this record.” A truly feel-good DIY success story, Dream in Colour also perfectly encapsulates the phenomenon that is Franc Moody themselves.