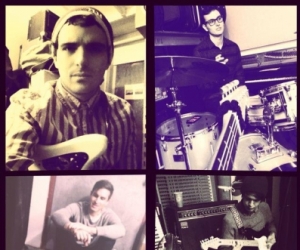 Twenty-plus years of stories, twenty-plus years of perfecting music’s craft, Ski Lodge‘s Big Heart is the culmination of a creative force’s life on this planet. Andrew Marr, the multi-instrumentalist, singer and songwriter behind Ski Lodge, has created a deeply personal record that overflows with lush melodies. His songs occasionally deal with dark matters—infidelity, painful break-ups, loneliness, disjointed father-son dynamics—but Marr bathes them in a blissful light ripe for sing-alongs.

“I try to write songs honestly, and a lot of the things going on in my head that I struggle with might be deemed ‘dark,’ but I don’t think that means I can’t sing about them in a way that is musically upbeat or poppy,” Marr says, from his home in New York City. It’s a dichotomy that also translates to Marr’s choice for musical moniker. He explains the name Ski Lodge “evoked an image of being warm by a fire, alone or with friends, while outside exists the cold and cruel winter.”

Big Heart, Ski Lodge’s debut full-length, out this summer on Dovecote Records, is Marr’s fullest realization of this hot and cold split. Marr wrote all of the lyrics and music, and played nearly every sound that ended up on the record. However, this was the first time the 26-year-old worked in a professional studio with a producer, the indelible Lewis Pesacov (Best Coast, Fool’s Gold), over several weeks in Los Angeles. The combination of Marr’s intrinsic songwriting and Pesacov’s LA-defining production skills resulted in music with fuller breadth and scope than Ski Lodge’s previous release without losing any of the wry innocence that made 2011’s self-titled debut EP so much fun.

The one exception is the lead single “Just To Be Like You,” which was recorded with the full band in Upstate New York using producer Kevin McMahon (The Walkmen, Real Estate).