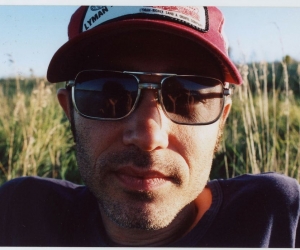 Share on TwitterShare on PinterestShare on PocketShare on RedditShare on FacebookShare on Email
Simon Joyner, who has over the course of thirteen-albums created a unique & influential body of work on a myriad of independent labels & Dennis Callaci, who has recorded nearly as many records with his band Refrigerator & runs one of those said labels (Shrimper),  have collaborated on their second record together.  Their first release was a one-sided LP-only release on Catsup Plate Records a decade back entitled Stranger Blues, a direct to one track live recording of the 2 playing together & sharing one mic.  Though recorded in the same spot as the previous record (the living room of the Callaci home) New Secrets
is a different record altogether from the previous EP.  The new 11 track record was recorded and mixed live by Jarvis Taveniere (noted for his Rearhouse recordings and as a member of Woods) over the course of 3 days with the duo being backed up by Simon’s band from the Ghosts record of last year.  Augmenting the band on these recordings are guest spots by Franklin Bruno (Human Hearts, Nothing Painted Blue) & Kevin Morby (Woods / The Babies).  The record is almost call & response w/ a Joyner song answering the plea to the preceding Callaci dirge. Reuniting the orginal cast from the first release, noted artist Rob Carmichael has designed the cover art around Callaci’s drawings.