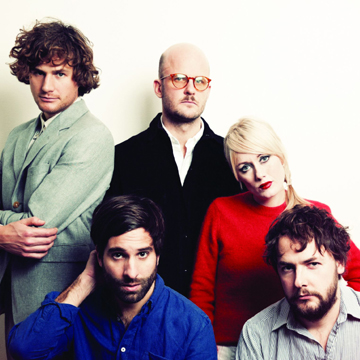 Shout Out Louds premiered the new video for “Illusions” today. The band will kick off their US tour in support of their new album Optica on May 7 at the 9:30 Club in Washington, DC.

Directed by Hugo Stenson, the video follows a woman on a speed dating adventure ending in a dance party. Frontman Adam Olenius says “In Sweden, to get 25 people to dance and act or even show up for a video shoot or anything in that area you have to buy them copious amounts of booze and lure them with money. In L.A., the city of dreams, they show up for nothing and shimmer!”

Shout Out Louds took their time with these songs, recording for about one-and-a-half years in a small Stockholm studio and producing themselves for the first time with help from Johannes Berglund. A theme emerged and Optica was born, an album celebrating color and light from a band confident in its sound, filled with real strings, trombones, trumpets and flutes.