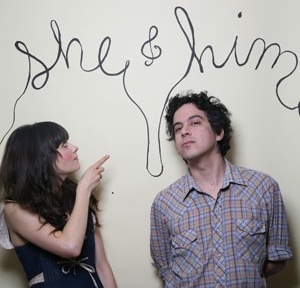 With an introduction that builds on a swirling string arrangement put together by M.Ward and an effortlessly bubbly and catchy chorus penned by Deschanel, they continue to express stories of bittersweet love affairs and tales of the heart.

“Matt is an incredible arranger of strings,” asserts Deschanel. “‘Never Wanted Your Love’ – the strings on that are amazing. That song started out with a drum fill but Matt took that idea and had the strings do a version of the fill. It was such a cool idea.”

Enthusiastic and keen to make the most of their varied tastes in music, She & Him are touring the US through June and July and will be playing the  Hollywood Bowl on June 23rd alongside Emmylou Harris & Rodney Crowell. They will also be joined by Camera Obscura on selected dates which can be found on their website.