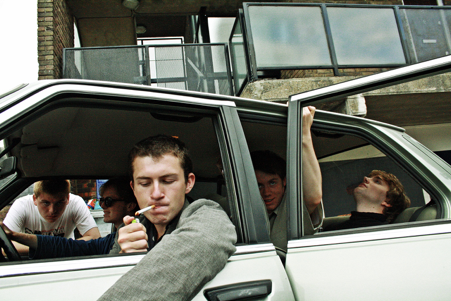 Today, South-London’s favourite band and “Holiday Inn’s most hated band”, drop a new video for Songs Of Praise album track “Dust On Trial.” The clip was directed by BISON, whose previous credits include Friendly Fires and Bonobo. The video pays homage to old school B-movies, subverting roles with a sinister femme-fatal who lures rich, young, handsome men to their death. The fast-pace thrill of the song is addictive and the video’s secrets and subtleties conjure the need to watch it again and again. WARNING: this is not for the faint hearted.

This year has been a busy one for London’s most-loved delinquents, who released their highly-acclaimed debut album Songs of Praise in January via Dead Oceans. Recently selected as Rough Trade’s ‘Album of The Year’, Shame have toured their viscerally thrilling live show relentlessly this year swiftly earning the reputation as one of the most exhilarating live bands in the UK. Having just returned from a tour of the USA and Asia, Shame are currently on a UK tour that will performa next at London’s 02 Forum in Kentish Town on November 30th.

About Shame via Dead Oceans

South London school friends Charlie Steen (vocals), Sean Coyle-Smith (guitar), Eddie Green (guitar), Charlie Forbes (drums) and Josh Finerty (bass) formed the band in a practice space at the infamous Queen’s Head in Brixton. Given three long months – rather than the usual six weeks – to fill in June 2014 after their AS levels, starting a band seemed the best use of that time for everyone.

The Queen’s Head was a lawless space where The Fat White Family rehearsed. “We kind of just took refuge there,” says Forbes. “The Fat Whites didn’t really know we existed for a while until we started using their stuff as we didn’t have any instruments.”

It was the filthy incubator that shaped the band and opened their eyes to whole new ways of life as the much older freaks, dropouts and misfits of South London who frequented it treated it like a freewheeling community centre. “You could do whatever you wanted there,” recalls Steen. “Nothing was off limits.”