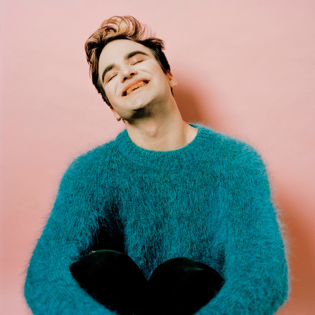 One of Canada’s most creative new artists, Scott Hardware has shared the title-track titled “Engel,” off his forthcoming release, due out on April 3 via Toronto indie label, Telephone Explosion Records (Freak Heat Waves, Adonis Adonis).

Engel arrives four years after Hardware’s debut release, Mutate, Repeat, Infinity, an album that tackled his own coming-out experience, the HIV/AIDS crisis, and the courage of his close friends who dealt with the diagnosis. In the intermitting time, Scott spent a period living in Germany before moving back to Toronto where found inspiration for his second album in the form of Wim Wenders’ Berlin-set 1987 fantasy film, ‘Wings of Desire’. Briefly speaking, the film follows angels around pre-unification Berlin as they listen in on the conversations and thoughts of mortals, comforting the distressed and assisting them in finding solace.

“I sought with this album to capture the film’s velvety feeling – funny, depressing, dark and mundane – in LP form,” Hardware says. “These songs imagine Wenders’ angels buzzing around my friends, my family and I. Writing from their point of view allowed me unfettered access to my own thoughts about them and myself.”

Touching on art-pop, vapourware and the industrial sounds of The KVB, Lust For Youth and The Soft Moon, et al., ‘Engel’ demonstrates Hardware’s penchant for summoning rich textures, cast against refrained vocals and layered piano work. There’s a misty, somewhat uncanny mood set with ‘Engel’, which, amongst it’s symphony of field recordings, tells the story of a subject’s relationship which a mischievous angel named Engel: “Here he comes to comfort me,” sings Hardware, “but like a fly around my head I’d sooner swat him dead.”

Engel matches Hardware’s debut in terms of its unflinching honesty and its drive to create something truly idiosyncratic. With its cover art adorned by an image created by artist, Chris Curreri titled ‘Insomniac’, Hardware finds an artistic partner who shares a similar sentiment, nodding to queer sex, darkness and emotionality.