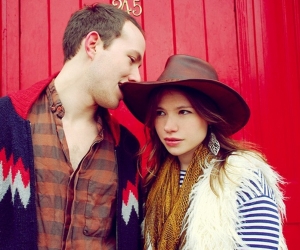 Brooklyn-based duo Savoir Adore have premiered new track “Beating Hearts” The song will appear on the upcoming re-release of their latest album Our Nature, out June 4 via Nettwerk Records. The band just launched a tour of North America to date, opening for Sea Wolf on 26 cities across the U.S. and Canada.

Formed in 2007, Savoir Adore—Paul Hammer and Deidre Muro–has become a fixture of the Brooklyn music scene. Following the release of The Adventures of Mr. Pumpernickel and the Girl with Animals in Her Throat and 2009’s In The Wooded Forest. The band spent much of last year on the road, both headlining and sharing the stage with artists like Stars, Jukebox The Ghost, Ra Ra Riot, Oh Land and Lights.