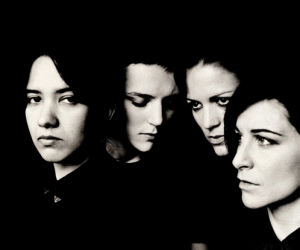 At the end of Savages’ debut album Silence Yourself, comes an unexpected turn. On album closer, “Marshal Dear,” the band’s thrilling, taut sonic framework gives way to a softer, more elegiac sound. Introducing piano and clarinet for the first time on the record, it’s a song that sees the album slowly unspooling from the intensity of the previous ten tracks.

“Marshal Dear” is now accompanied by a film, created by Gergley Wootsch and Savages guitarist Gemma Thompson. Like the song, it’s an unexpected visual turn: an ambitious animation that moves away from previous Savages videos which were defined mainly by striking live performance footage.

The ‘Marshal Dear’ animation was inspired by a scene in Kurt Vonnegut’s Slaughterhouse Five – a novel about a disillusioned American soldier recounting his experiences of the Second World War and his adventures in time travel. Gemma Thompson, Savages’ guitarist, scripted a rough version of the storyboard based upon one scene in particular with the intent on finding a young animator who had worked on animating by hand. After two months of watching portfolio reels, she eventually found the work of Gergely Wootsch, a London animation director just graduated from the RCA.

The scene from the novel occurs whilst main protagonist Billy believes he has become ‘‘unstuck in time.’‘ He turns on the TV and focuses on a scene in a movie about bombers in the Second World War. The aircraft take-off backwards from an airfield, flying backwards over cities in flame. The exploded bombs and shrapnel begin to piece themselves together and rise back into the bellies of the aircraft and the bullets are sucked out of the bodies of the fallen men. The bombs are eventually brought back to the factory in which they were constructed, dismantled and the elements placed back into the earth.

Says Gemma Thompson: “This scene would replay in my head and I could imagine it as an animation of lines flowing into each other, much like early hand-drawn animation created to accentuate a musical score. I also thought it was beautiful how Billy tries to right the process of destruction and how this echoed the true story of the character in the song Marshal Dear – Field Marshal Rommel’s attempted assassination of Hitler to end the Second World War which resulted in him being forced to take his own life to spare those of his family. We worked on bringing the character of the factory worker into the fore so that the animation now focused on the role of the woman working in the factory and the bomb itself as she realizes her hand in the destruction.”

Meanwhile, Savages will embark on a UK headline tour next week. The tour will include Savages’ biggest UK headline show yet at London’s Forum, following an extensive 23 date North American tour, which is highlighted by a show at New York’s Terminal 5, in addition to shows opening for Queens of the Stone Age. Head to http://savagesband.com/live for full information