Saul Conrad on Tour This February 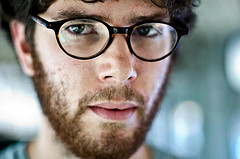 Steeped in acoustic folk and brimming with vivid and corrosive wit, Boston-based songwriter and guitarist Saul Conrad is gearing up to tour across the East Coast and Midwest this winter. Conrad will be performing a raw and pared down set of songs off of his debut LP, Poison Packets, out via Mountain of Leopards. Influenced by a strong set of musical forefathers, Saul has forged a poetic style all his own, noted as being “at the intersection of Jonathan Richman and Daniel Johnston”. Accompanied on the tour by labelmate and longtime comrade Katie Schecter, the pair’s vocals weave together to make a sound perfectly suited for the intimacy of the shows throughout February.

The tour kicks off on February 14th at The Lily Pad in Boston.