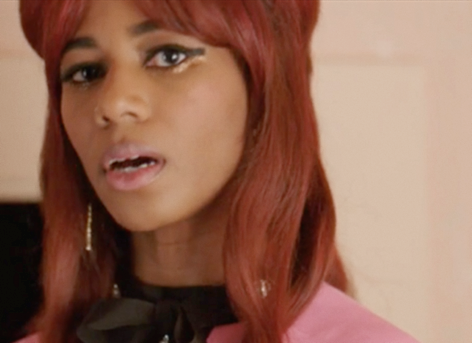 Santigold is kicking off 2016 by sharing a new track and accompanying video, “Chasing Shadows,” from her third album 99¢ due out February 26th via Atlantic Records. Vampire Weekend’s Rostam Batmanglij produced the track, which also features backing vocals from the West Los Angeles Children’s Choir. “ ‘Chasing Shadows’ is about with the conflicted reality of an artist’s life. Caught in the web we spin around ourselves, a mixture of hubris and the guise of perfection, we fear being swallowed up by our own ambition. Never in the moment, as quickly as we reach our goals, our gaze shifts to those still looming in the distance. We judge ourselves harshly for not being further on the path and revel in the anxiety of racing the rate of consumption. The lyrics weigh the value of going against the current to maintain artistic integrity, and the feelings of isolation and vacancy bred by a persona that is always “on” and ready for show,” says Santigold. The lyrics are underscored by Santigold’s rapid-fire vocals. The video, which premiered today, was directed by Elliott Lester (Nightingale, Blitz, Love Is the Drug).

In conjunction with the new track and video for “Chasing Shadows”, Santigold has released another comical infomercial on Santigold.com. Following her recent comedic roles on The Office and Adult Swim’s NTSF:SD:SUV, she began creating infomercials for every song on 99¢ as an extension of the album’s exploration of the commercial nature of our world and the ways in which we package ourselves and our lives for consumption. “We have no illusion that we don’t live in this world where everything is packaged. People’s lives, persona, everything, is deliberate, and mediated. It can be dark and haunting and tricky, and freak us out, but it can be also be silly and fun and we can learn to play with it,” she says. She also explores our fascination with perfection and our inherent inability to attain it. The use of playful satire, social critique, and self-examination to explore these themes is reflected in the album’s cover art, a collaboration with photographer Haruhiko Kawaguchi (photographer Hal), which finds Santigold shrink-wrapped amongst her cluttered possessions ready for the store shelves.

“Chasing Shadows” follows the video for “Who Be Lovin’ Me (feat. ILOVEMAKONNEN)”. The jubilant duet was produced by Toronto duo Zeds Dead and finds Santigold and ILOVEMAKONNEN.