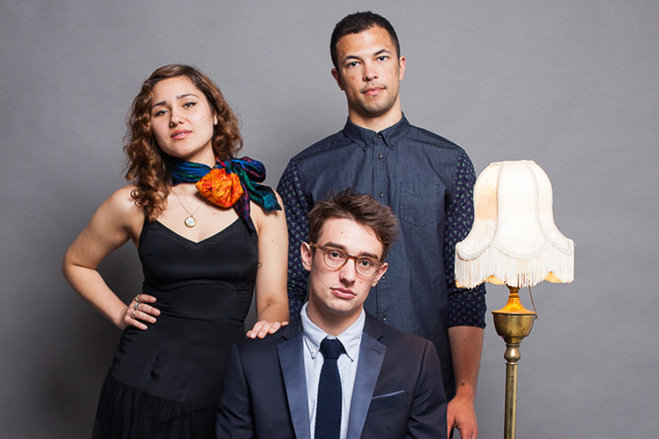 Northern Transmissions caught up with Ellis Ludwig-Leone of San Fermin for an insightful interview. Their self-titled album will be out September 17th on Downtown Records.

NT: Your background is in Classical Music, can you tell me about how you got involved in that genre.

ELL: I went to school at Yale, which has a strong classical program.  I had played classical piano since I was eight, but I hadn’t had much theory or schooling in the history of it.  When I was in high school playing the piano was almost more of an athletic thing for me– I played all these Russian knuckle busters and was really concerned with how “hard” each piece was.  I always had rock bands, but the two worlds felt separate to me… my lessons were pretty far from where I lived, and none of my friends really knew about it, whereas my bands, we would always play at the school’s Battle of the Bands and stuff.  So once I got to Yale, it was like, if I want to really get involved with this tradition, now is the time.  I kept going with my rock bands on the side, but I really threw myself into the Classical thing.

NT: It sounded like you went into isolation when writing the album San Fermin, was this something you felt you needed to do to?

ELL: I knew I wanted to write an album that captured something honest about that moment in my life, being just out of school and on my own for the first time, and I think it would have been very difficult to do that without a little bit of space.  For me at least, it’s hard to say something meaningful if I’m cramming it in a few hours in the afternoon, between answering emails and like, meeting friends for dinner or whatever.  Especially being in Canada, there were so many things that put me out of my element — traveling alone, being in a different country, being away from my family and friends, not being able to watch Patriots games, being really, really cold — those alienating factors help you examine things in a more thoughtful way.

NT: The whole album was almost entirely composed before you went into the studio. The recording process must have been pretty seamless, did you change many arrangements around ?

ELL: The arrangements didn’t change much at all, actually, I recently went back and listened to the original mockups and I was surprised how similar they were.  I tend to overdo it with the instrumental parts, so it was mostly about subtracting things that were too over-the-top, or getting in the way of the vocals.  The biggest changes were when I was working with the singers, particularly Allen Tate (the male lead vocalist), who had a bunch of lyrical substitutions and melodic suggestions to make it fit his voice better.

NT: You describe the first single “Sonsick” “as a panic attack disguised as a birthday party”, can you talk about the song a bit?

ELL: It was the last song I wrote on the record; I wrote it when I was back in Brooklyn.  I realized that the female voice on the record hadn’t quite had her say, and I wanted to flesh her out a little more as a character.  When I got back from Canada, it was a shock to the system… some of my friends had gotten rather corporate jobs and I envisioned this inevitable procession that kind of terrified me.  The female character who sings it, she’s suspicious of romantic love because she sees it as a temporary fix that leads to a very ordinary adulthood somewhere in suburbia.  It seemed like the best way to deal with that panic was to dress it up in trumpets.

NT: Can you tell us a bit more about the rest of the album, should we expect to hear a bit of your past musical background or a bit of a continuation of the first single?

ELL: It’s all over the place, stylistically.  It’s been weird because there’s only the one song out, so people think of us in a certain way, but it’s really just one data point.  Like, no one has even heard our lead male singer yet.  And there’s all these interludes that are very composed in a way that is more similar to what I was doing in school.  My hope in writing it was if I used a lot of recurring themes and kept to an over-arching structure, and wrote very quickly, then I could vary my stylistic palette a bit and still make it sound like all these songs came from the same place, could exist in the same room.  But  hopefully it’s a room that has a lot of furniture in it.

NT: What is it about San Fermin the city, and Hemingway inspired you?

ELL: It was more of a jumping-off point, really. The San Fermin festival is totally insane, it’s all these people putting their lives in danger for seemingly no reason except to live their lives “all the way up” as Hemingway said.  It’s less about the author and more about the concept; one of the themes of the album is this search young people have for importance in their lives.  A lot of people find it in romantic love, or in religion, or they wash their youth with an unexamined nostalgia and put it on this pedestal.  So I looked at a lot of those things and had my characters try them on.  The thing that stayed consistent throughout the album was that in raising the stakes a little — living “all the way up”– at least you feel something.

Miles Davis – In a Silent Way