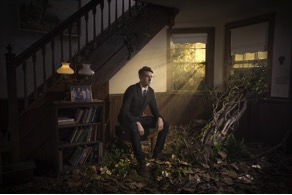 Bandleader, Ellis Ludwig-Leone, wrote Jackrabbit by himself from start to finish, only to find that after a year testing the songs on the road — which included shows with St. Vincent, Arctic Monkeys, a co-headline tour with Courtney Barnett, and festival stops at Lollapalooza, Fun Fun Fun Fest, and more — the album wasn’t nearly completed. Ellis explains, “I went from being this isolated composer guy, out in the woods, to sitting in the back of a van with seven other members playing shows in rock clubs every night. When I got back, I revisited it all, ripped these holes in the middle of all the existing songs and added some new ones. I rethought everything I had been writing.”

Co-produced by Peter Katis (The National, Interpol) and Ludwig-Leone, Jackrabbit bears the scars of experience admirably, with the touring band on full display: Ludwig-Leone on piano/synth, Allen Tate and Charlene Kaye on vocals, John Brandon on trumpet, Stephen Chen on saxophone, Rebekah Durham on violin, Michael Hanf on drums, and Tyler McDiarmid on guitar. If their debut could seem prepared and guarded to the point of being polite, Jackrabbit lines that record’s complicated compositional maneuvers and grandiose pop eruptions with necessary aggression.

On February 12, 2015, San Fermin will join a prestigious list of artists ranging from Steve Reich + Stephen Sondheim, to Talib Kweli, in performing as part of Lincoln Center’s American Songbook series, where they’ll be accompanied by the Metropolis Ensemble in the Appel Room (formerly the Allen Room). They are also confirmed to perform with the Alabama Symphony Orchestra on March 6, where Ludwig-Leone is the composer-in-residence, before headlining the Savannah Stopover Festival (March 5-7). San Fermin will tour extensively in 2015 – more tour dates will soon be announced.