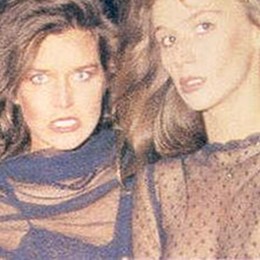 We recently shared the release of Saaâda Bonaire, a compilation of mostly unheard (2 tracks were previously released) tracks recorded nearly 30 years ago in Bremen Germany, sharing the single “You Could Be More As You Are”

This single illustrates the myriad of musical elements that were used to create Saâda Bonaire’s unique sound and highlight it’s timelessness.

Saâda Bonaire: The fantastic duo that was never meant to be. Formed by Bremen DJ Ralph “von” Richtoven in 1982, Saâda Bonaire was a studio project based around two young sultry German singers and an extremely diverse backing band. Its fusion of Eastern instruments, dub aesthetics, and disco production still sounds fresh and unique today.

Originally signed to EMI in 1983, their first and only single, “You Could Be More As You Are”, was produced in Kraftwerk’s studio by legendary Matumbi, Slits and Pop Group producer Dennis Bovell. Just as the “would-be” hit single was due for release, a scandal struck at the EMI office.

Saâda Bonaire’s A&amp;R man was notoriously famous for exceeding his budget. He spent triple his allowance on Saâda and was warned not to do it again. His next project was Tina Turner’s “Private Dancer”. As “Private Dancer” shot to number one in Germany, the finance department couldn’t lay a finger on Tina. Instead, they pulled the plug on all promotional support for Saâda Bonaire and cancelled all future plans for the project. The group disappeared from public eye soon after.

This self-titled release compiles two songs from the original EMI single plus eleven unreleased songs (recorded between 1982 and 1985). Although these tracks were made thirty years ago, they seem totally contemporary when juxtaposed with what’s happening now. The melding of striking female vocals similar to those of Chairlift’s Caroline Polacheck with rhythmic disco beats ala Glass Candy or Chromatics, Saâda Bonaire feel at home in the current musical environment.

Saâda Bonaire will be available on CD and Gatefold Deluxe Double LP. Also included with this release are previously unpublished photos and in-depth interviews with the band members.

01 You Could Be More As You Are