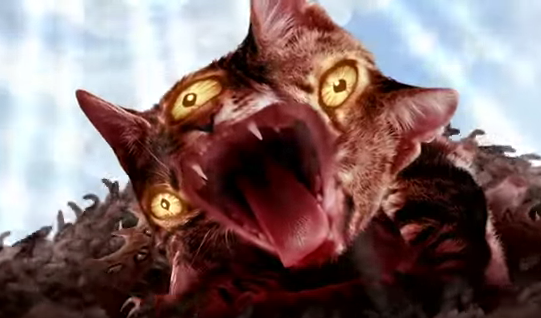 Last September Run The Jewels made music history when they unleashed the world’s first cat-rap charity album Meow The Jewels. Today, in conjunction with Adult Swim, the group released a mind-altering video by esteemed cult video artist Cyriak for the album’s lead track “Meowpurrdy,” a remix by El-P that deposits his and Killer Mike’s vocal performances in the midst of a rhythmic vapor of meows, purrs, and hisses. Cyriak’s visual treatment is an LSD-nightmare miasma of cat limbs and teeth fractalizing into feline Cthulu-esque monstrosities engaged in an epic battle between cat heaven and cat hell.

The video arrives on the heels of the announcement that the duo will be returning to Coachella for a second subsequent year. Between shows the duo has stayed busy – Killer Mike’s very vocal endorsement of presidential candidate Bernie Sanders has yielded several television appearances, from fielding questions on Sanders’ behalf on NBC after the recent Democratic debate, to schooling Late Night With Stephen Colbert’s audience about the candidate’s platform, to interviewing Sanders on his own YouTube channel in a series of videos that have since gone viral. Meanwhile El-P has hunkered down in the studio to work on the group’s third album.

Meow The Jewels is currently available via Mass Appeal Records as a limited edition, specially packaged tawny brown vinyl edition with the iconic Run the Jewels album cover hands represented in actual faux fur. The vinyl album can be found at record stores worldwide, and the digital version for free from the duo’s website. Well known for their social and political consciousness, Run the Jewels donated the initial earnings from Meow The Jewels directly to the families of Michael Brown Jr. and Eric Garner, two men who lost their lives to police violence in highly publicized tragedies. All additional profit from the album is being donated by Run the Jewels and partner label Mass Appeal Records to the National Lawyers Guild’s Mass Defense Committee.