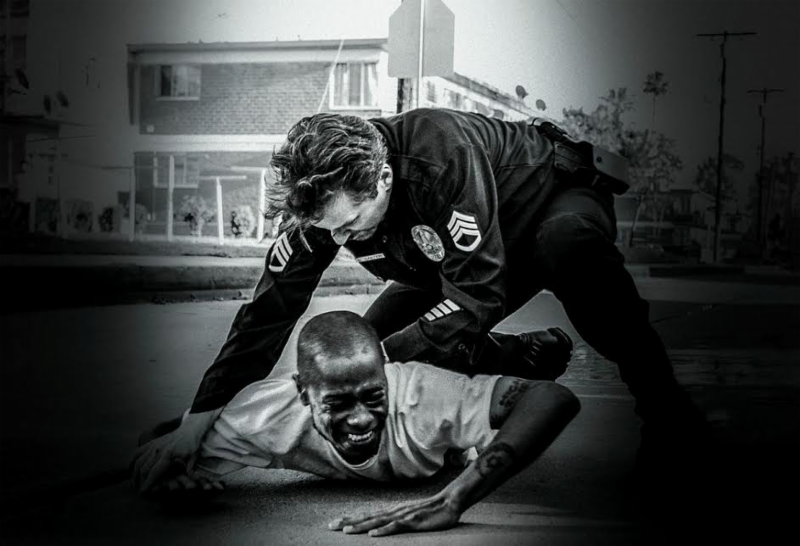 Run The Jewels have unveiled an AG Rojas directed video for their track “Close Your Eyes (And Count To Fuck)” featuring Zack De La Rocha, the latest single from their recent album Run The Jewels 2.

The thought provoking video stars Shea Whigham (Boardwalk Empire; Wolf of Wall Street) and Keith Stanfield (Selma; Straight Outta Compton) as a white cop and a black youth locked in a violent struggle that appears to have no beginning and no end, nor a clear instigation or purpose.

“When Run The Jewels sent me this, I knew we had the opportunity to create a film that means something. I felt a sense of responsibility to do just that. We had to exploit the lyrics and aggression and emotion of the track, and translate that into a film that would ignite a valuable and productive conversation about racially motivated violence in this country. It’s provocative, and we all knew this, so we were tasked with making something that expressed the intensity of senseless violence without eclipsing our humanity. For me, it was important to write a story that didn’t paint a simplistic portrait of the characters of the Cop and Kid. They’re not stereotypes. They’re people – complex, real people and, as such, the power had to shift between them at certain points throughout the story. The film begins and it feels like they have been fighting for days, they’re exhausted, not a single punch is thrown, their violence is communicated through clumsy, raw emotion. They’ve already fought their way past their judgments and learned hatred toward one another. Our goal was to highlight the futility of the violence, not celebrate it.”

For El-P of Run the Jewels “this is a vision of a seemingly never ending struggle whose participants are pitted against each other by forces originating outside of themselves.”

Adds partner Killer Mike “this video represents the futile and exhausting existence of a purgatory-like law enforcement system. There is no neat solution at the end because there is no neat solution in the real world. However, there is an opportunity to dialogue and change the way communities are policed in this country. Salutes to AG Rojas for his unique take on the subject matter and to Shea and Keith for giving us their all and bringing it to life.”

The video arrives in the midst of a flurry of festival appearances across the world, including Sasquatch, Primavera, Firefly, Roskilde.