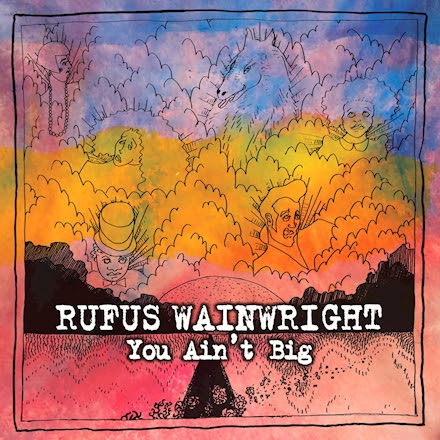 Rufus Wainwright has shared a video for “You Ain’t Big” a song off his highly anticipated upcoming album Unfollow The Rules, out July 10 through BMG.

Wainwright says of the song and video:
“I originally wrote the song “You Ain’t Big” about the strange fact that in the music business worldwide until recently (our estimation has fallen considerably) no matter how well you’ve done anywhere else, if you couldn’t make it in the heartland of the US you weren’t really considered a true star. Think Little Richard, Elvis, the Beatles and Julio Iglesias. However, in releasing this song now which references states such as Alabama, North Carolina, Kansas (where I have had the pleasure of playing shows) and even New York and California, all troubled places during this tremendously turbulent time nationwide, the term “You Ain’t Big” has taken on additional meanings. The song at heart is apolitical. Its vintage sound harkens back to the classical American country music sound of the 40s and 50s and with the help of opposing images in the video of how different life was for white people compared to black people in the 1950’s, as it has sadly remained, I think it rings appropriate for this time and professes a certain truth.”