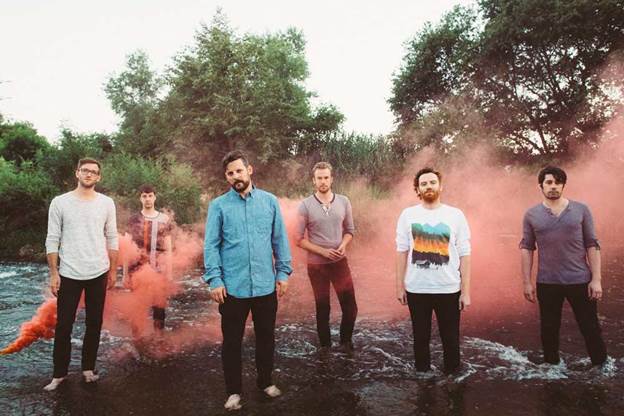 Royal Canoe’s latest album, Something Got Lost Between Here And The Orbit, was released last week via Nevado Records. Today, the Winnipeg band share the lyric video for “Bicycle”. Animated by Bill Acheson and Matea Radic. “They identified that it was written from a child’s perspective, so we pitched back the idea of a children’s storybook theme with simple line drawings based on our interpretation of the lyrics,” says Acheson. Royal Canoe, kick off their tour tonight in Los Angeles.

After two years of writing and recording between tours, Something Got Lost Between Here And The Orbit surfaced with a unique and intensified voice. It was co-produced and mixed by Ben Allen (Gnarls Barkley, Animal Collective, Deerhunter), who concentrated their sound-crafting attention on two fundamental elements: drums and vocals. In addition to their their usual buffet of synthesizers, effects pedals and homemade samples, late nights lead to to rabbit-holes of attaching contact mics to water bottles to play them like percussion instruments and convoluting synths through beluga whale field recordings.

Almost three years have passed since the release of Royal Canoe’s sophomore album Today We’re Believers. Those years were full. The band played 200 shows, which included tours with the likes of Alt J and Bombay Bicycle Club, and stops at major festivals like Bonaroo, Iceland Airwaves, and Osheaga.