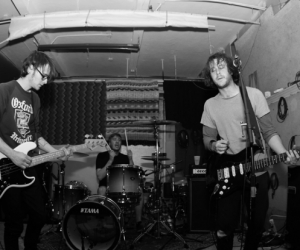 Roomrunner are pleased to announce the second single from their debut album due out on 5/28 via Fan Death Records.  A pre-order link for the album can be found above, and you can listen to the lead track “Bait Car” above.  Formed after the dissolution of Denny Bowen’s much-beloved post-hardcore trio Double Dagger, Roomrunner finds Bowen ditching the drum kit for a guitar and a microphone.  Already gaining a reputation for being deafeningly loud on stage, the band is currently gearing up for a few shows with Mikal Cronin and even more touring later in the summer. Check below for current dates.

Recorded by bassist Dan Frome at his studio, Ideal Cities is the first Roomrunner offering recorded as a full band. Prior EPs, the self-titled Roomrunner (2011) and Super Vague (2012), were written and played by Roomrunner singer/guitarist Denny Bowen.