Robert Schwartzman has announced The California Roll Tour, a multi-city tour that will feature a new way for fans to enjoy the live concert experience. The California Roll Tour consists of shows this fall, taking place across the country inside a party bus, limited to 30 people per show. The experience is an all-encompassing one, featuring an hour of live music, an exclusive listening party of Robert’s forthcoming LP (coming early 2015), a Q&A, meet & greet, and exclusive merchandise. Robert is encouraging ticketholders to submit song requests, anything from his song catalogue with Rooney or solo, as the audience will be able customize the set list for each event. Also available at these shows will be a physical copy of Robert’s new EP (details to be announced soon).

The California Roll Tour is a unique approach to the traditional touring model. The tour will be passing through most major markets, kicking offSeptember 19th in Boston and including shows in New York City, Philadelphia, Washington DC, Nashville, Atlanta, New Orleans, Austin, Dallas, Las Vegas, San Francisco, and Los Angeles.

Robert is the first artist to use The California Roll Tour for a full multimarket US tour; he created this event concept out of a desire to give fans and touring artists a way to showcase live unplugged sets in a unique, fun, and intimate setting. Robert, who toured with his prior band,Rooney, for over 9 years, hopes that other artists will see the potential of this new touring model. David Pack of the band, Ambrosia, will be embarking on his own California Roll Tour later in 2014. 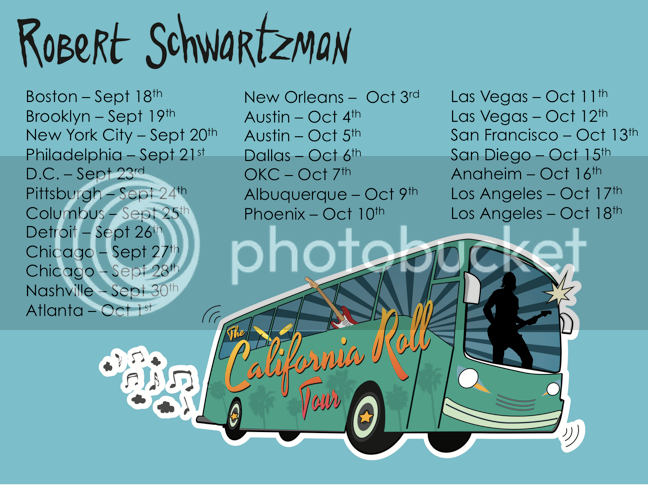