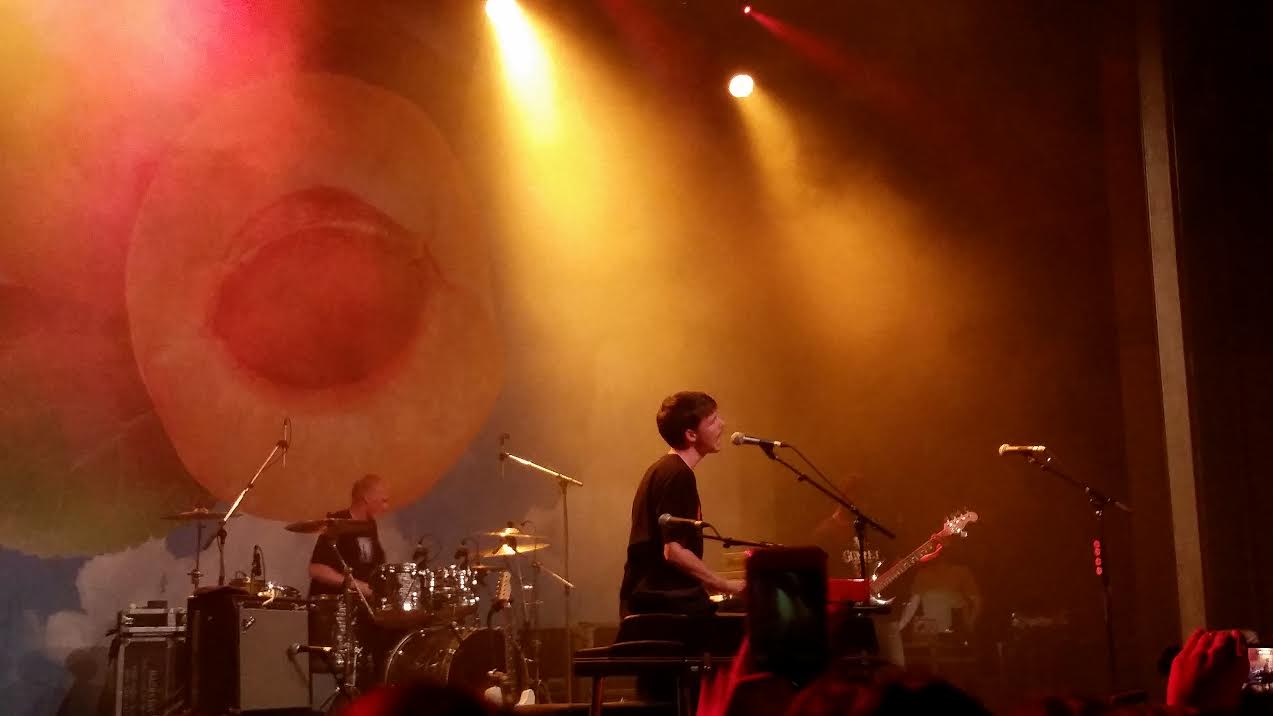 Rex Orange County and guest Cuco filled a sold-out Vogue Theatre with heart-on-the-sleeve emotion last night (August 7). The crowd was all-ages, and Rex and Cuco weren’t much older, both being 20. Cuco, real name Omar Banos, was half an hour late for his opening set. Or his set time got pushed back by 30 minutes. Either way, it was a long time to stand still in a packed crowd on such a hot night. But anyone who grew impatient as they sweltered forgave Cuco the moment they saw him.

Cuco has come a long way from making music in his bedroom in Hawthorne, California. He and his band – a drummer, two guitarists, two keyboardists, and a bassist – brought smooth, textured pop and R&B to life. He even whipped out a trumpet, one of the first instruments he learned, for the funky “Lo Que Siento.” He also paid tribute to his Mexican American heritage on a chill trumpet track. “How many y’all speak Spanish?” he asked beforehand, making the crowd pop hard. “Shout-out to my raza!”

Cuco rapped in an easygoing demeanour on “Lo Que Siento,” but he called for the crowd to start a mosh pit before he turned “Lucy” into a hard trap track. “I need this to be the craziest concert you’ve ever been to!” He urged the crowd to “JUMP! JUMP!” on “Summertime Hightime.” Again, in its original form, this track is vaporous. Cuco also entered hype mode on “CR-V.” His crew danced all over the stage, turning it into their own playground. For his finale, he brought the crowd back down with the dreamy, hand-waving vibes of “Sunnyside.”

Unlike Cuco, Southeast England’s Rex Orange County was all live instrumentation. Rex, real name Alex O’Connor, alternated between keys and guitar. He was only accompanied by a drummer and a bassist. The ornate strings and brass that appear on his joyous and melancholy 2017 album, Apricot Princess, were absent. He did introduce a special guest, though. “For the first time on this tour, we’re gonna bring her out and do this song.” Out came Thea to sing her part on “Sycamore Girl.” She is his girlfriend and the album’s main inspiration. Rex revealed she wasn’t the only guest that night. “Shout-out to Nardwuar in the house,” he said before playing “UNO,” his collaboration with Two Inch Punch and BADBADNOTGOOD.

Rex Orange County is difficult to place neatly into boxes, but he skews towards R&B, pop, and funky rock. He raps, too, and the crowd followed his every word on songs like “Paradise” and “Television/So Far So Good.” The second half of his set contained more guitar songs. He even went solo on the six-string on “Untitled,” “A Song About Being Sad,” and “Corduroy Dreams.” “Corduroy Dreams” and “Best Friend” got the biggest sing- and clap-alongs of the night, especially has he whistled the interlude on the former. For the only encore, Rex played “Loving is Easy,” his one-off single with Benny Sings.

Two years before Apricot Princess, Rex Orange County put out the more lo-fi bcos u will never be free. Depending on whom one asks, it was his first mixtape or full-length debut. Although he pulled from both releases, his set still only ran for 52 minutes, ending at 10:22 pm. Unfortunately, unlike Rex, Cuco, and their fans, who were still amped, it was a school night, so the night was not young anymore.