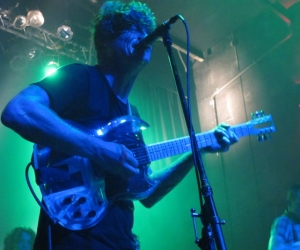 Die-hard fans of San Francisco’s Thee Oh Sees were more than a little confused by first glances of the band’s charismatic frontman John Dwyer behind the merch table during his opening acts – was Dwyer wearing pants? Where were this wild man’s trademark cut-offs? Is summer officially over? Do Thee Oh Sees still sound as good when Dwyer is dressed weather-appropriate? Thankfully, we never had to find out. Dwyer donned his trademark black cut-offs before hitting the stage to kill it.

Openers The Blind Shake, consisting of brothers Mike and Jim Blaha and drummer Dave Roper, brought a high level of energy to the already near-full venue with their tight three-piece garage rock sound. The crowd was appreciative, and there were certainly a few dancers ready to be swept away by the evening’s entertainment. The band failed to present any memorable tunes or truly catchy choruses, relying instead on gimmicky matching outfits and (probably) shaved heads. Their short set was enjoyable, if forgettable.

Vancouverites in their most stylish “power outfits”continued to shove their way into the ever-more-crowded Rickshaw as Austin, Texas’ darlings OBN III’s took the stage. This band’s charm sits squarely on the shoulders of frontman Orville Bateman Neeley III, a pretty young fellow with a blond bob and a penchant for climbing on all the stage furniture. The half hour that the OBN III’s occupied the stage was a raucous one filled with twangy garage rock anthems perfect for getting a little bit more wasted to.

By the time the Oh Sees took to the stage, there was no room to move. Somehow, however, there was room to dance. A pit opened up almost instantly and continued even during the jammy bits (“Block of Ice” seems to be the band’s current extend-a-mix tune on this tour). Dwyer sang, screamed, scowled, sweated and spit like the fiend that he is. Upon Dwyer breaking a string mid-song, the band shared a split-second round of glances and jammed it up for the five minutes the guitarist needed to change his string. A huge part of the charm of Thee Oh Sees is how they are so amazingly tight, and how nothing phases them.

Dwyer took a moment out to thank the club bouncers, many of whom were bobbing their heads right along with the crowd. Everyone was in a fantastic mood, and the positive energy was contagious. Thank goodness Dwyer put his cut-offs on!